Friday night I wrapped up my gig at the Phyrst with my buddy Noah, then made the transformation from musician to fisherman again. I’ve done this a bunch of times now, and the thorough contrast in venues is remarkable: from the noise and chaos of the State College bar scene, to the silence and comfort of a trout stream; from people everywhere to people nowhere. The change is stunning.

Thirty-one degrees as I turned into the small pull-off, cold enough to require a couple extra layers and some forethought in choosing those layers wisely. Too much and I’ll be sweating from from the walking; too little and I’ll be freezing in the slow moving pools.

I think a major factor in the decision for most fishermen to hang up the rods when the thermometer drops is the serious pain-in-the-ass that dressing and undressing for the conditions can be.  I used to feel accelerated urgency about this necessary chore, but over time I’ve tried to moderate that. If you hurry through the things in life that you were waiting for,  you just might rush past the enjoyment of the whole thing.

About a ten minute walk on a good trail and I was on the water, ready to work my way upstream. I had fished this section at night one other time, working my way downstream with wet flies as I usually do, but I had very little success that night. I felt like I was on top of the fish too much, like they could see and hear me coming. Because this section is small water — and has a lot of thick brush and overhanging trees — it mostly requires an approach of wading down the center; and on that previous night trip  I think my approach was not a good one, especially with the water low and the night sky clear and bright. That was my theory, anyway; and a good fisherman has to have a theory.

It didn’t work.  The sky was too dark and I didn’t know the area well; I couldn’t picture my surroundings  well enough to place a good cast, and I spent the first twenty minutes in the trees; untangling Governors, Professors, and Silver Doctors from the greedy embrace of limbs and branches.  I needed a change or the night would be a wash out, so I backtracked — wading down the stream, back to the bank, and up the trail, with a new theory that fishing downstream would be best.

I had to pass the spooky shed again. Night fishing requires the suspension of haunting thoughts; if you allow your creative mind to fill in the gaps of what could happen then you won’t last long.  I stopped watching horror movies around the same time that I started seriously night fishing.  Not kidding. I can’t tolerate images of Leatherface, Freddie Kruger or Jason running around in my brain waiting to be attached to the spooky shed.

On the path into one of my favorite night fishing spots I have to pass an old school bus: broken windows, flat tires, door busted and hanging open, dingy, dirty and with parts of the forest around it in the process of reclaiming the space. I’m not going to imagine what might be in that bus ….. and that’s my point.

The reason I had to backtrack past the spooky shed, instead of just walking the bank upstream and then fishing it back down, is that there is no bank here; it’s all thicket. Heavy brush, small trees and briers.  Oh, the briers …..  I still had to fight through a patch of them to get to the top of the island where I wanted to start swinging down, and so I found myself about 40 minutes into the night, crawling in various stages of mud and thawed ground, and being horse-collared by briers. Finally, the red light of my headlamp lead me to the waters edge. I turned the light off, and I started fishing again.

It took a little while, but I landed a small wild brown. 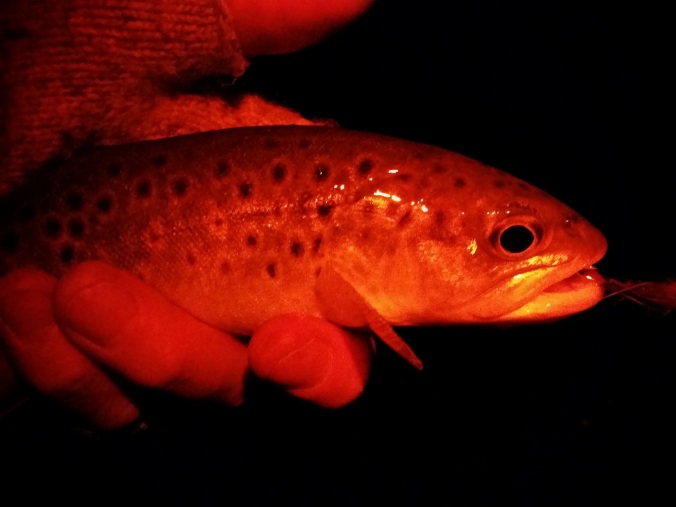 I needed that one, and a few minutes later I was hooked up again.  Then another. Night fishing is like this for me; I have flurries of action in one area, and then I work through water where it seems like I could hit a home run, but I strike out. Over time, I’ve realized that it’s the tailouts and the soft edges that produce for me at night. It’s getting to the point where I can almost predict where those places will be, but the truth is I’m stubborn about it.  Instead of heading right for those prime night spots and working them hard, I fish them, but I also keep trying to move fish in all the water between.  Surely there are fish holding in the other areas, and maybe they’d be willing to eat if I presented them with the right opportunity.  Is that a good theory? I don’t know — but I have one.

Could I pick up more fish in other water types by switching to a bottom bouncing type of rig and fishing upstream? I’ve been working on that with little to show for it. Do I need to go bigger in those situation? I’ve spent a lot of time with large streamers fished closer to the bottom; again, with only minor success. Some nights I get a lot of bumps but not a lot of hookups on that rig, and if I have a wet fly in tandem, they usually seem to take the wet fly better.

So, after a couple other fish in that first tailout, I hooked something larger. It was a fun, quick fight with a lot of splashing and short runs. I was using 10lb Maxima Chameleon as tippet, so I horsed the fish in quickly, trying to save the rest of the tailout for catching a few more. 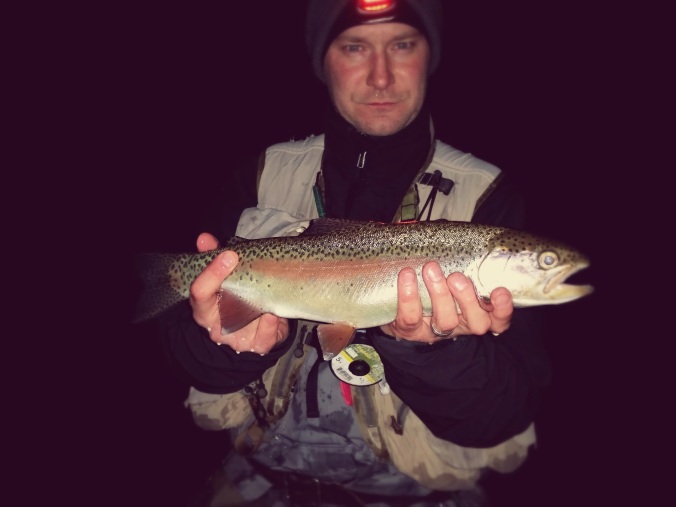 This rainbow trout was not what I was looking for.  It was a good sized fish, and was fun, but it wasn’t a wild brown trout; and therefore, a Second Class Citizen.

That first tailout ended up to be the hotspot of the night.  I fished down through a lot more water and fished the prime stuff hard, but only picked up a couple more fish. I finished the night with a mistake (just like I started the night).  It was late — even for a night fisherman — and I was ready to go home.  I could sense that I was just about even with the pulloff where my truck was parked, but about 80 yards of brush was in between.  I had already done the backtracking thing once on this night, so instead, I got ambitious and followed a wide deer path through the thicket and headed in the general direction of my truck. Of course, the deer path narrowed and I lost it about half way through, so I found myself crouching, crawling and fighting with briers the rest of the way back.  Oh, the briers ……

I finally have an honest understanding about what draws me into night fishing. Yes, it’s the fear. And of the serious night anglers I’ve known, it’s the same for all of us. Fear is the crackling spark plug . . .

The lost friendship transforms a river bend — the one with the ancient and hollowed-out sycamore — into an active tombstone. The towering tree with the undercut bank becomes a place to remember shared moments of casting into cool waters, where the ghosts of laughter and fond companionship persists.

For those who fish daily, the routine resonates. We are part of the pattern, not mere observers of the design.

We have time to learn and grow, to breathe deep and sigh with satisfaction. We’ve the time to stand tall, to rise from the constant crouch and the intensity of a fisherman, to take in the surroundings, not once, but regularly. It’s the ferns, the sun and the rain, the trout in the water and the birds on the wind. It’s everything . . .

What water type? Where are they eating?

Fast, heavy, deep runs have always been my favorite water type to fish. I can spend a full day in the big stuff. I love the mind-clearing washout of whitewater. No average sounds penetrate it. And the never ending roar of a chunky run is mesmerizing. I also enjoy the wading challenge. The heaviest water requires not just effort, but a constant focus and a planned path to keep you upright and on two feet. Constant adjustment is needed to stay balanced, and one slip or misstep ends up in a thorough dunking. It reminds me of the scaffold work I did on construction crews in my twenties. I always enjoyed being a few stories up, because the workday flew by. When every movement means life or death, you’d better stay focused. I always liked that . . .

His casting loop unfolded and kicked the nymph over with precision. And when the fly tucked into the darkest side of the limestone chunk, Joey kept the rod tip up, holding all extra line off the water. It was a gorgeous drift. And the air thickened with anticipation.

We watched together in silence as Joey milked that drift until the very end. And I think we were both a little surprised when nothing interrupted the long, deep ride of over thirty feet.

Joey flicked his wrist and repeated the same cast to the dark side of the rock. And because the world is a wonderful place, a no-doubter clobbered the stonefly nymph . . .

Nobody Home | Nobody Hungry

Nobody home means there’s no trout in the slot you were fishing. And sometimes that’s true. Nobody hungry suggests that a trout might be in the slot but he either isn’t eating, isn’t buying what you’re selling, or he doesn’t like the way you are selling it.

Does it matter? It sure does!