One of these days I’m going to file an amazing night fishing report . . .

I started about an hour before dark, and action was crazy good on nymphs. Basically, I was Frank Nale-ing it, but just imagine what I could have done with a gold bead white spinner.

Right before dark I decided to change to my night fishing leader and tie on this fly.  “It’s the one that says bad mother f…….” 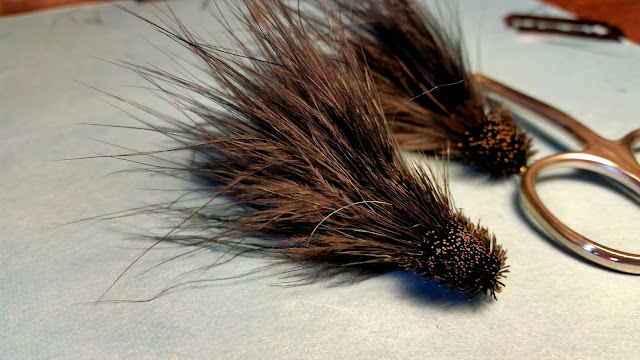 Took a big swig of water, affixed the headlamp to my forehead, tied Bad Mother to my .013 Maxima Chameleon tippet, and I got ready to swing the heartache.

The first cast shouldn’t even count. You know what the cast looks like, you’re basically just getting the line out there a little further. So the (technically) second cast happened and, damn did it land in a sweet spot. I twitched the rod tip, I thought about the first time I got laid, and then I lifted the extra line and short stripped that fly line subtle, like a p-r-o-fessional.

I’d been night fishing in the summers for years but never really dedicated myself to hooking up with anything large, usually just fishing close to home, but on this night I had purposely planted my boots in some big-fish-water.  I finally had a waterproof phone/camera solution and a GorillaPod and I was ready to get night pics of some slobs.

There was enough light to see the outline of a trout as this fish broke the surface.  I mentioned the .013 “tippet” right?  The difference between that line and the 4x tippet that I usually tie on for nymphing is what changed this fight.  I never did get used to the lack of stretch in the line, and this big boy and I had a short, energetic fight all on the top of the water.  Splashes, jumps and short runs ended with my first brown of 20+ at night.

What else do you want to know? Heart was racing and blood pumping as I felt the weight of a good fish in the night net. This being only the second time to set up my tripod and the first actual picture worthy fish for it,  I didn’t know whether I was more happy about the fish or the new fly. First cast? This fish?

I tied that fly two days before, trying to copy the black thing that I saw sticking out of the mouth of every big trout in a five minute Rich Strolis night fishing slide show. As I plucked the fly out of the mouth of this exhausted trout I whispered, “That’s a bad mother f……” 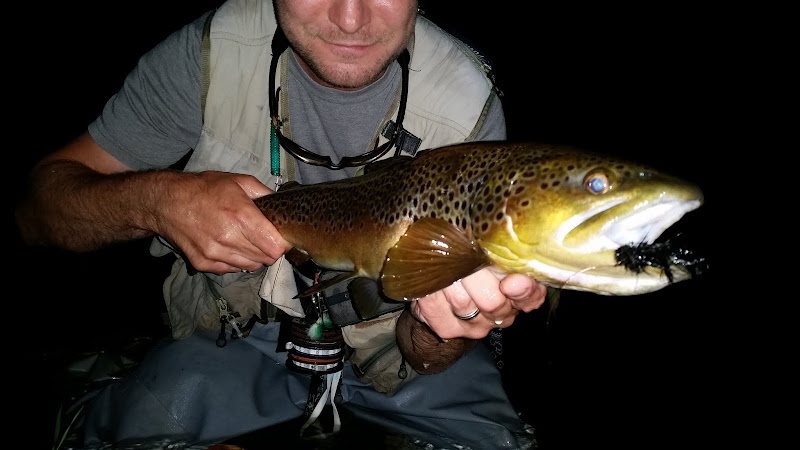 Minutes later I texted this picture to some of you and immediately ruined the rest of my night with that curse. I fished for two more hours and got nothing. Not a bump. “What the hell happened,” you ask? I have no explanation.

But, I refuse to let what happened in the last two hours of this night of fishing sway me from what I believed after one cast with that fly.

Maybe we should call the fly Honey Bunny.

In the interest of accuracy and honesty, it wasn’t completely dark yet when I hooked the fish. I could still see my fly on the water, so this can’t count as a night fish.

But, one of these days I’m going to get to file an amazing night fishing report …..

Just as the Cicada settled again, with its deer hair wing coming to rest and its rubber legs still quivering, the pool boss came to finish what he started. His big head engulfed the fly, and my patience finally released into a sharp hookset on 3X. The stout hook buried itself against the weight of a big trout . . .

Understanding the ideas of other anglers through the decades is how I learn. It’s how we all learn. The names change, but the process remains. We build a framework from others. Then we fit together the pieces of who we are as an angler . . .

Every angler goes fishing to get away from things — and most times that means getting away from people too. So whether they be friends or strangers on the water, going around the bend and walking off gives you back what you were probably looking for in the first place . . .

Troutbitten State of the Union — 2020 Wrap Up

The real joy of having Troutbitten as my career is in all the chances I have to be creative. The articles, presentations, videos, web design, and the guided trips — each one is an opportunity to communicate ideas about why we fish, how we fish, and what keeps us wishing to fish, day after day. Thank you for that chance . . .

Walk Along — Jiggy On The Northern Tier

This article is part of the Walk Along series. These are first person accounts showing the thoughts, strategies and actions around particular situations on the river, putting the reader in the mind of the angler.

Tuck. Drop. Tick. Lead. Now just a five-inch strip with the rod tip up. Pause slightly for the fly to drop. Focus . . . Fish on!