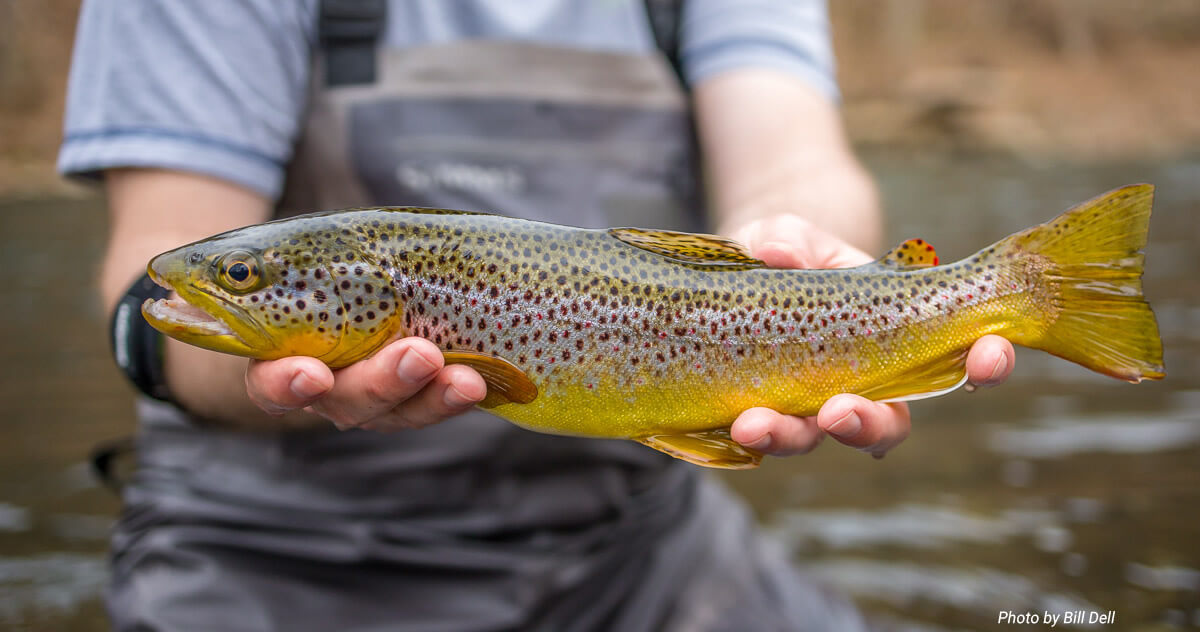 Good fishing comes in patches. We wade into a prime spot, catch a few trout and miss another, until the action tapers off and we move on. Maybe an unexpected handful of fish comes in a piece of side water, but we find no takers in the next dark pocket. It’s unpredictable, so we fish to put together the puzzle. For me, that starts with finding a water type where trout are feeding. And when I fool a fish, I expect to catch the next trout immediately in front of the first one. Because trout line up in productive seams.

I remember watching Smith work an underrated section of our home stream on an early spring evening. We’d both hooked a bunch of fish — enough to fairly agree that trout were eating best on the shaded outside banks and in water that was a foot or two deep. They were also taking the tag flies more than the point position, and the bite was on.

While watching my friend, I knelt to rest in the shallow water at the top end of the riffle I’d been fishing. I’ve always enjoyed observing skilled anglers at their craft, just to see how they approach the water and make the next decision. Right away, Smith poked a decent brown from a limestone-green lane. It slipped the hook, but Smith cast right back into the slot with a single backcast. On the next drift, he hooked a second trout that ended up in the net.

The water was clear enough that walking upstream would have likely spooked trout. So, many anglers would have chosen to fish from bank to bank, fanning casts out to cover all the water, before moving upstream. But Smith did the opposite. He continued working the same lane from where he’d just convinced two trout. He deviated very little left or right, throwing only a few test casts out of the main seam. His chosen lane originated fifty feet up at a washer-sized boulder. And in those next fifty feet, Smith found at least another half-dozen fish waiting to eat — all of them from the same seam, as he fished it from bottom to top.

READ: Troutbitten | Trout Like to Do What Their Friends are Doing

Trust the lanes. Trout choose them for a reason. And while it might not make sense to us why they pick one lane over the next, don’t argue with the fish. Wherever you fool a trout, expect to catch his friends in the very same lane. Follow that seam all the way to its beginnings, even if the character of that seam changes from deep to shallow or from slow to fast. Stay in the lane, and trust that more hungry trout are there, waiting to be fooled.

Trout come in patches. Success comes in waves. I noticed this as a beginning angler, but I first thought of these locations as areas, or regions of activity. And I roughly drew a visual circle around the spot, trying to fish all of the water around. But with experience, I learned to see the river in lanes, and I believe this is more in line with how trout treat the river. I’ve come to realize that productivity happens in lanes more than areas. So my target zones aren’t circles and ovals as much as lines drawn in the river that follow a seam all the way to its origin.

Trout stack up nose to tail. They like to do what their friends are doing. And if a trout chooses a feeding lane, there’s good reason for it. Other trout surely notice the same attraction, and they often line up in the same seam. On a good river with the right vantage point, like a bridge, you can often see this clearly, with a line of trout stacked in one seam, all actively feeding in the current.

Wherever you catch a trout, expect to catch his brother just a foot upstream. Follow that success and expect more.