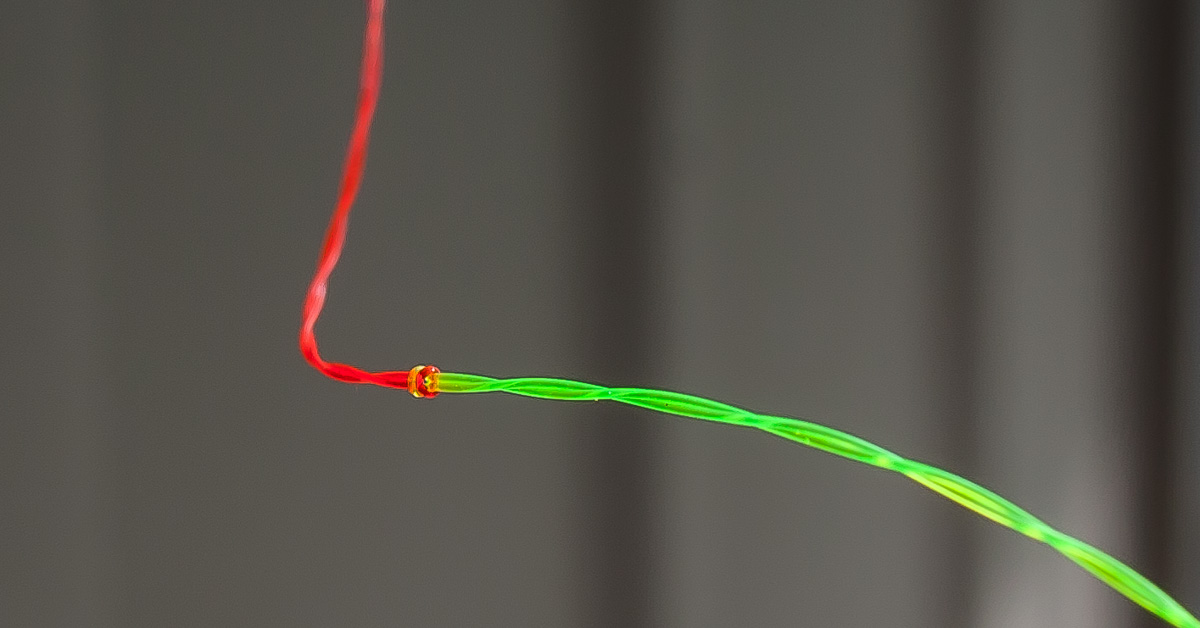 Tight Line Nymphing | Where Should the Sighter Be?

What’s the sighter for? Ah, well that short length of colored line changes everything, doesn’t it?

The twenty-inch chunk of vivid monofilament, tied into the leader just before the tippet section, is perhaps the most useful element in the Mono Rig. But how do we best use it? And where should it be during the drift?

Spawned by the ardent imaginations of anglers, sighters are creatively constructed from a myriad of materials, all designed to improve the visibility of a simple leader. Monofilament is surely the most common. However, even ordinary mono is shaped into variations, forming a wide collection of detectable shapes: There’s curled, furled, braided and more. But straight sighters are most widely used and versatile. To catch up, go back and read Sighters: Seven Separate Tools on Troutbitten.

The advantage of tight line nymphing is the control it lends to the angler. We can then dictate the course of the flies at the end of the line. The direction, speed and depth are all up to us. Sometimes, these are burdens better left to an indicator (that’s a whole different article). But a skilled fly fisher who can make the most of a tight line rig has the advantage in many situations. And the sighter is our focal point. The sighter shows what the line is doing. And if the angler can read contact on the sighter, it points directly to the flies.

I should mention, my sighter is a bit different than most. I attach a one-inch orange Tag Sighter made from twenty pound Dacron, near the middle of the colored line. The added visibility and sensitivity of the Tag Sighter is unmatched. I also use the same Dacron backing to attach  a small tag-less Backing Barrel to the first section of my tippet. I keep it about a foot below my sighter, and it drastically improves the visibility and tracking of every drift..

So a good sighter is highly visible and responsive. We use it not just for strike detection, but to also tell us everything about how the flies are drifting under the surface. 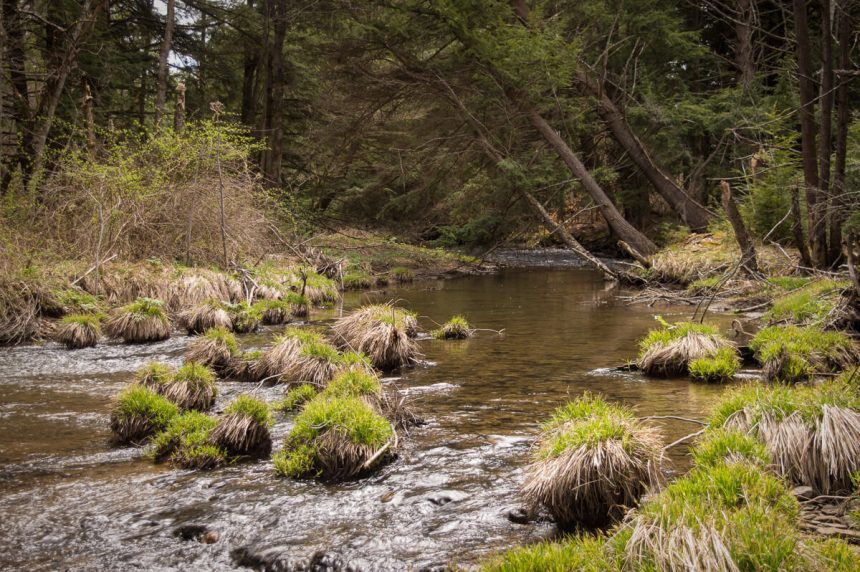 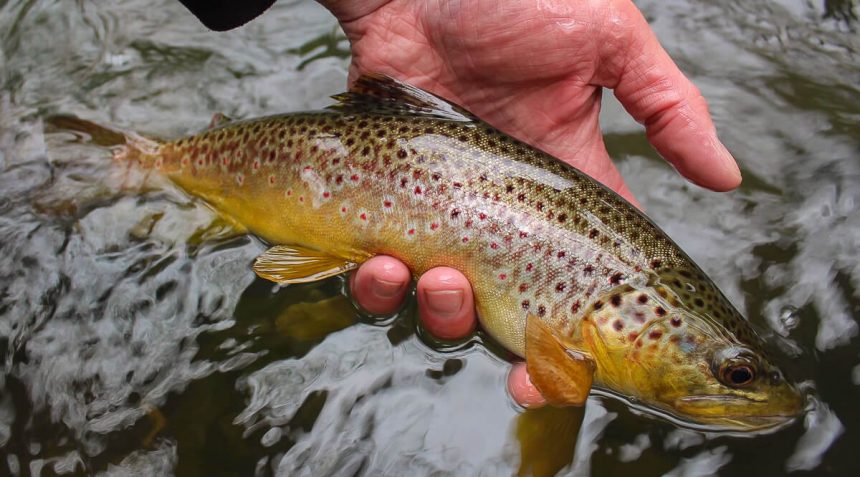 Floating the sighter is what I consider a secondary tactic. While it’s extremely effective, it’s not the primary method for tight lining — keeping the sighter above the water is the primary tactic. Most sighters can only support a small amount of weight, and if I’m using more than a #16 tungsten beaded nymph, I probably cannot effectively suspend it with a sighter.

What most guys seem to do when floating the sighter should really be called floating the slack. They aren’t actually suspending the nymphs. With a normal payload of weight required to get to the bottom of your average pocket water or run, the sighter sinks as soon as it’s in touch with the nymphs. Before that (while the sighter is floating) there’s usually a little bit of slop in the system, a bit of slack — and that can be a good thing. Floating the sighter is a great technique, but it’s helpful to understand exactly what’s going on. If I really want to suspend something, I usually opt for a small Dorsey, a Thingamabobber or a dry fly.

More often, tight line nymphing is about keeping as much line off the water as possible. The sighter is above the water and in touch with the nymphs.

READ: Troutbitten | Everything that Touches the River Drags — Everything Underneath Drags Even More

How high should it be? It doesn’t matter, and you don’t get to decide that. The river does. If the drift is good, I can read the signs of a sighter when it’s three feet off the water or three inches above it. Now let’s think about that . . .

“How far off the water should I hold my sighter?”

I hear the question a lot, and it always confuses me a bit. Honestly, it’s a bad query. It’s like asking how long the tippet section should be before either of us ever sees the water. No one really knows until we see the conditions. Like everything else around here . . . it depends.

Questions like these seem to come with a smart-assed answer, like the one I just gave. But you might get a more qualified and accurate response if you really press someone. So I’ll say this: I prefer my sighter close to the water. Six inches to a foot is probably my most comfortable setup. But I’m not willing to clip and tie tippet all day just to make that happen. Not very often, anyway. So I choose a length for my tippet below the sighter to start the day, factoring in the maximum water depth and speed I expect to encounter. And unless I run into unusual circumstances, I stick with it.

So how far off the water should you hold your sighter? The answer comes by considering the conditions in front of you, by observing the sighter, the water speed and depth, and deciding where you want the nymphs in the first place. 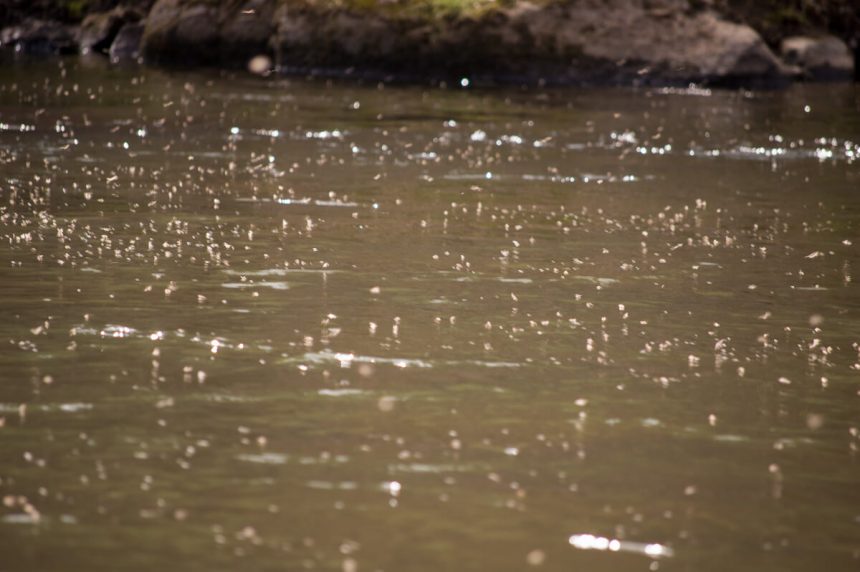 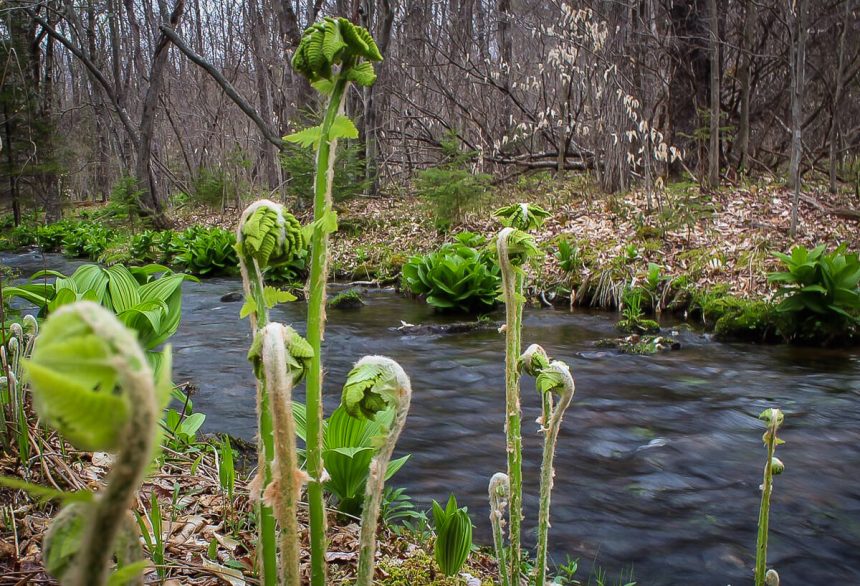 Let’s agree: the most common destination for a point nymph is the bottom. More precisely, we want it in the cushion of water near the bottom where trout usually hang out (the strike zone.) The water in that 4-20” zone is slower than the mid-current because it’s in constant contact with rocks, vegetation, the streambed itself, and . . . well . . . trout (hopefully). So the water in the strike zone near the bottom is our target.

After the cast, I like to keep the rod tip high. On all but the longest casts, I can usually keep my sighter off the water without dragging it unnaturally downstream. (That’s exactly what the monofilament butt section in the Mono Rig allows for. Because fly line destroys this presentation.)

Most often I throw a tuck cast, so as my nymphs enter the water they get a bit of slack added on top of them, allowing them to sink to the bottom quickly, without the unnatural tug of a tippet section. Although even when I straighten out the cast (no tuck), I still do a slight upstream push with the rod tip to give the nymphs a touch of slack to sink easier. It helps. Then I watch the sighter and track the flies.

Just recover the slack that the drift feeds you, by leading the sighter downstream. If you’ve given some slack for the nymphs to dive to the bottom, then the sighter will seem loose at first. But try to gain contact within a second or two. Watch for the sighter to tighten. Then allow a slight bend in the mono but not so much that it’s limp. Then lead enough so the sighter is almost straight.

The sighter signals when it’s in touch with the nymphs. It tightens up a bit under the load of even the lightest flies. It stiffens when the line is taut and the slack is gone, and it may slow a bit.

Once I read contact on my sighter, the next ever-so-slight tightening is what I watch for. It signals that my nymphs are in the strike zone, right where I want them. I then keep my sighter at the same height and angle for the rest of the drift, perhaps varying it for known drop-offs or faster currents through the ride. 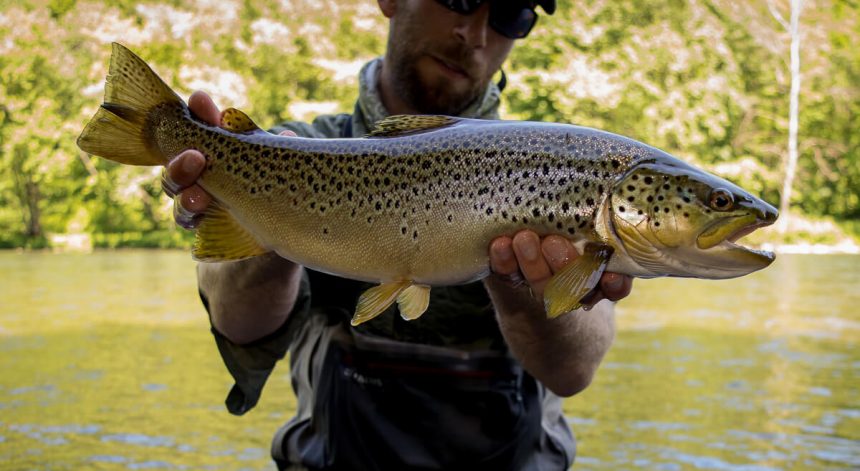 Every spot in the river is unique. In one pocket, my sighter may be two feet off the water when I reach the strike zone. At the next turn, on a deep outside bend, I may find swift depths that require a sighter angle to be more vertical and only inches above the water. Maybe I even need to submerge half of the sighter to reach the bottom. (I rarely do this.)

Let the river make the decision. And just do what you’re told.

If I know I’m fishing skinny water all day, I go with just 3-4 feet of tippet to my point fly. On the contrary, if I plan to fish deep runs for most of the day, then I may extend my tippet length to 6-7 feet before I even begin fishing. I then work most of the day with what I have set up.

If I find a shallow piece of bank water, I might hold four feet of tippet above the surface as I fish thin water for ten minutes, before getting back to the deep stuff. Rarely do I stand there and waste time clipping and tying tippet, although sometimes, at the extremes, it is necessary.

First read the water. Then read the sighter. Then catch trout.

Good luck out there. 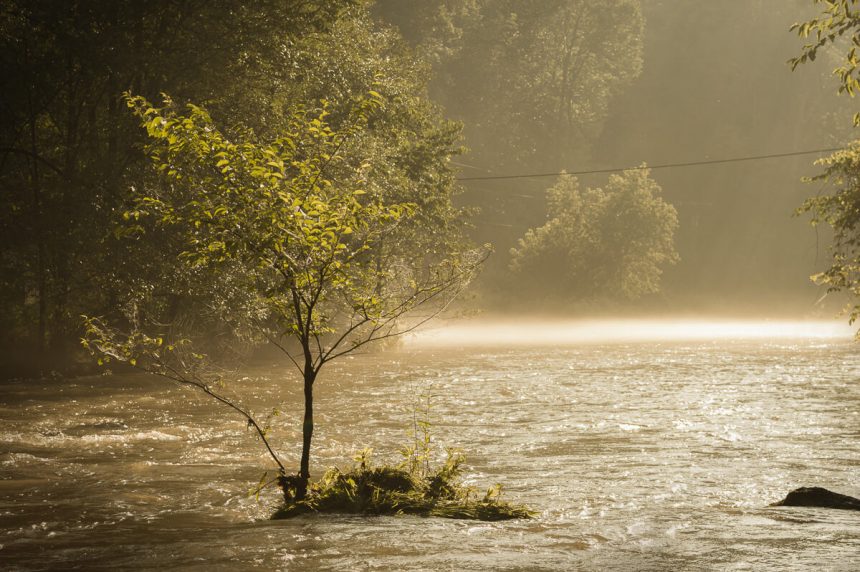