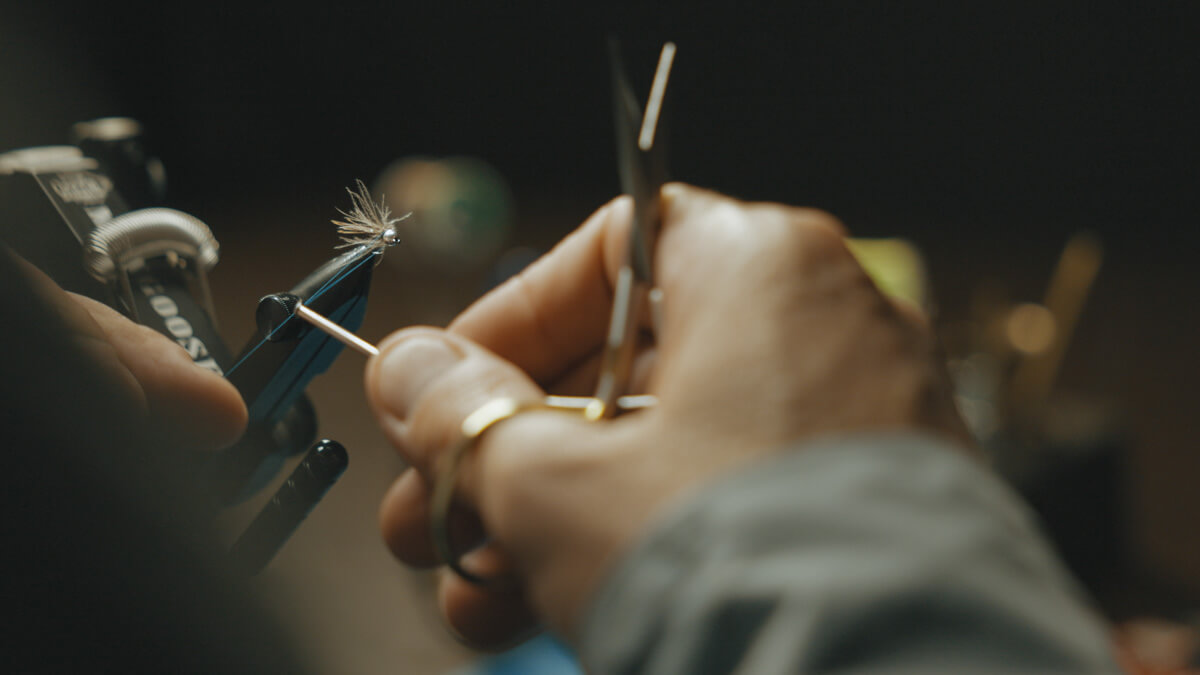 I remember the first time I met someone who told me they tied flies but didn’t fish them. I was standing at the counter in a fly shop, waiting for the manager to tally the damage, when a kind man sitting in a well-worn chair struck up a conversation. The shop dog sat patiently by his side.

We chatted about dry flies and Regal vises as I laid down the credit card, signed my name and took the receipt for a tiny brown bag for which I’d paid too much.

When I asked the man if he had ever dropped a nymph off the Slate Drake Parachute we were talking about, he replied that he didn’t fish.

He said it with the flatness of someone who had seen the same confusion that came to my face on hundreds of others in the same fly shop.

“You mean, you don’t fish anymore?” I asked.

“Nah, I never really got into it,” the man said. He patted the fawn-colored Boxer on its head as he stood up. He straightened his sport coat, flattened his slacks and signaled for me to follow him a few steps over to the fly bins.

I remember wooden floorboards creaking as I stood beside the man who smelled like fragrant cedar. Everything about his attire and presentation was meticulous. He reached to the top row of flies and plucked three of the most perfect specimens I’d ever seen. Placing them in the palm of his hand, the dry flies hovered on their hackle tips. Nimble, they animated in a moderate breeze coming from the humming HVAC that I hadn’t noticed until then.

We spent a half hour together, and I knew in a few minutes that I’d met an artist. His name was Graham. His dog’s name was Charlie. He tied tens of thousands of flies for the shop every year, and he had never wet a line. 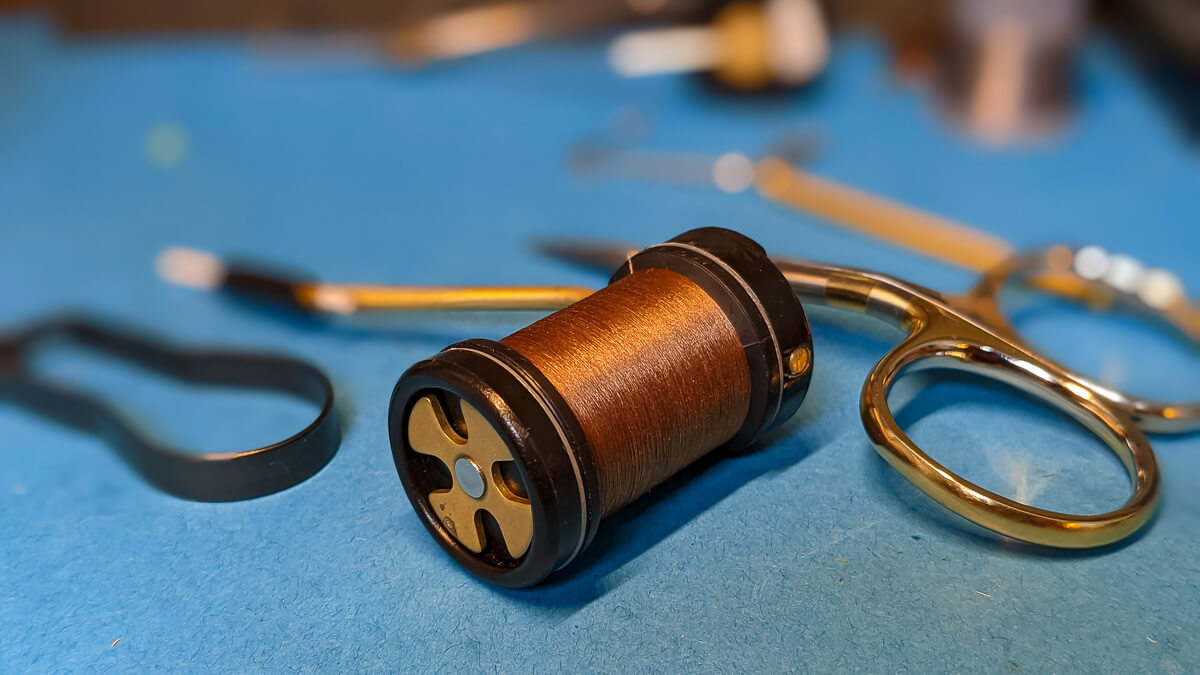 It was early June, eight-o-clock, on a perfectly cool evening with a good hatch of bugs in the air.

They were mayflies — what I thought of as late Sulphurs. The smallest of the season, these bugs had a predictable way of falling all at once in the kind of grand spinner fall that anglers tell stories about. It would begin an hour before dusk and continue into the dark — if you had the guts to hang around — and trout lost all measure of caution when these dead mayflies hit the water. I’ve seen spinner falls where worried trout would nose multiple bugs before sipping one down. But for whatever reason, the wild trout in this river, over these bugs, joyously gulped mouthfuls of spinners into the moonlight.

As I rounded the bend on an angler’s path I found the source of tobacco scent. I was about to meet Lincoln. He was perched on a tree stump made for sitting. He was smoking a cigar, watching and considering everything around him.

The path led me in front of the man, so I nodded as I passed, but I kept my head down.

“You’re not planning on fishing there are you?” He motioned to the flat water in front of him as I turned to reply.

“Oh, so you’ve been here before?” The man asked his second question with a lighter tone.

We shook hands, and Lincoln cracked a smile as he somewhat sheepishly told me that he’d thought I was going to jump into the water before the spinners fell.

“Years ago, the evening hatch was respected,” Lincoln told me. “My friends . . . We sat on these banks and waited for the rises. And then we fished.” He motioned to the sky but continued looking at me. “When those spinners started falling — that’s when we made our first cast.”

I nodded, and we paused in silence to watch the river pass.

“What fly will you fish tonight?” I asked.

When I spoke the question, Lincoln’s eyes brightened. He tilted his wide hat upward and peered at me over thick black glasses. Then he reached into a shirt pocket and brought out a small, clear-plastic Frabill box with no more than a half-dozen rows of foam. Enough light remained in the shaded canyon to see deer hair spinners, stand-up dry flies and emergers — all in perfect rows and all in three different colors. There were biot bodies, cut wings, calf tail fibers and split tails.

I thought of Graham and his dog, Boxer. And I knew I’d met another artist.

I sat on the stump beside Lincoln and listened to his gravely voice. He pointed out the intricacies of each fly. He spoke as a craftsman who loved his work. He told me that his brother still hunted birds — mostly to bring Lincoln the feathers — and how, years ago, he’d gotten all the hides he could ever want while trapping furs along this same river.

I marveled at the delicacy. I envied the patience and talent necessary to put such detail into a size #18 dry fly.

“Do you think any of that really matters?” I asked.

Before I finished the sentence, I heard my clunky misstep. To someone like Lincoln, the artistry of the fly was as important as the trout that it might fool. But I had never grasped this concept until the moment those last words hit my tongue, and I saw Lincoln’s face fall flat.

“Of course it does,” he assured me in a whisper.

Lincoln’s disappointment hung heavy in the air, and he slowly closed the fly box lid before sliding it back into his shirt pocket. Lincoln’s gaze returned to the river, and he silently plucked the smoldering cigar from the log beside him. Two puffs, and I watched his cloud of smoke rise to meet the mayfly spinners.

“Well, Lincoln, it looks like those spinners are about ready to fall,” I said. I knew there was no recovering from my words, and an apology would have only piled onto the insult.

Lincoln nodded affirmation without taking his eyes from the water, and I walked away, along the narrow path.

In the years since, I’ve met just one other angler like Graham. But I’ve met many more like Lincoln.

It’s easy to understand how tying flies makes you a better angler. And many fly fishermen take their passion for the river directly over to the vise. With that passion follows artistry. And for that kind of artist, what is wound around wire and bound to a hook comes with beauty . . . or there is no point.

One of the best tyers I’ve ever known would tie a dozen of the same fly and keep only two or three, stripping the rest with a razor blade to the bare hook. Why? He said he only fished the ones that had a soul.

I think Lincoln knew that the exquisite details built into his flies did not catch more trout. But it still mattered. That’s the fly tying artist at his best.

At worst, the fly tying artist begins to believe that his flies, and the elegant particulars therein, matter most — until he is sure that the right pattern can save every fishing trip.

Then again, maybe that’s not so bad after all. Convinced or curious? Sometimes, it’s that intersection of the two states that elicits the irresistible urge from a fish. And trout eating on the drop is one of those times. . . . It’s not red anymore. It’s burgundy, but it “might” be red again someday. I’ve been alive long enough to know that when something you love leaves, it’s best to start moving on. And yes, I’m a leader junkie . . .