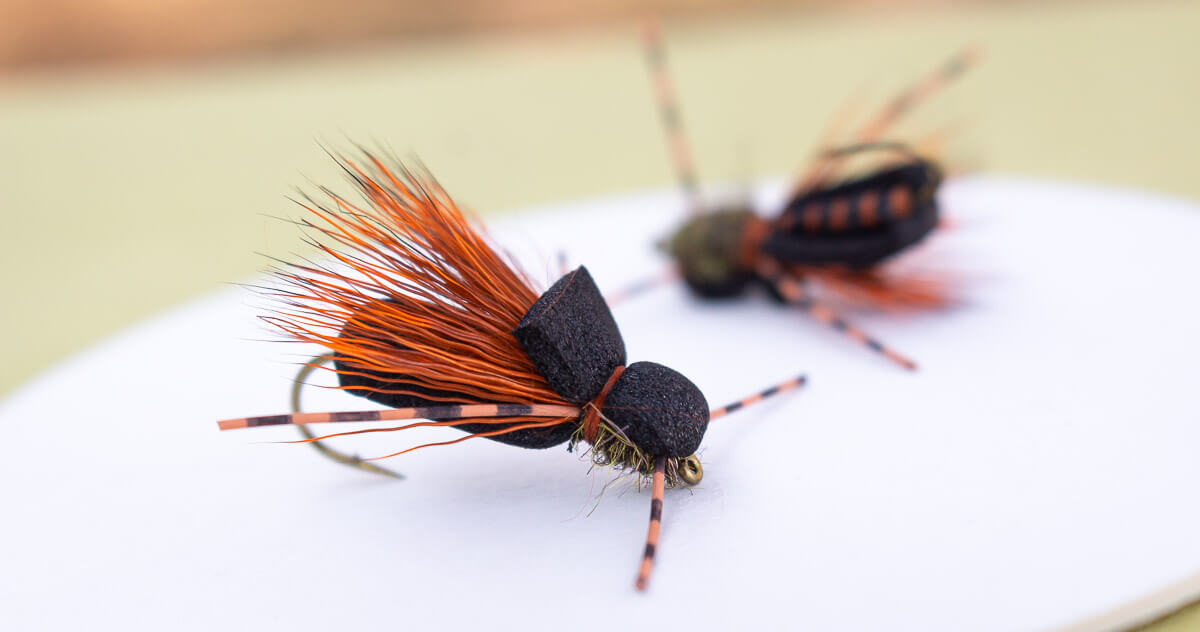 Sawyer and I were fishing the seventeen year Cicada hatch of 2008. It was a wonderfully consistent summer with cooler than average temperatures and higher than average river flows. Add with the occasional thunderstorm that tinted the water and kept trout active, and it was the perfect setup.

Day after day, my friend and I met early on the river to pick up where we’d left off the evening before. We learned that the big fish were in the prime lies — the deepest, greenest stuff under the waters of early summer. So we fished a mile of river each day together. And we skipped a lot of stretches that surely held trout, just because we’d found a water type where the biggest fish were playing.

Trout started around 9:00 every morning, and if we got a good cast in a great spot, big fish ate the fly. It’s the most predictable fishing I’ve ever had. And Sawyer and I were in a fisherman’s heaven, as we fished multiple fourteen-hour days, wearing ourselves out over a couple of weeks. 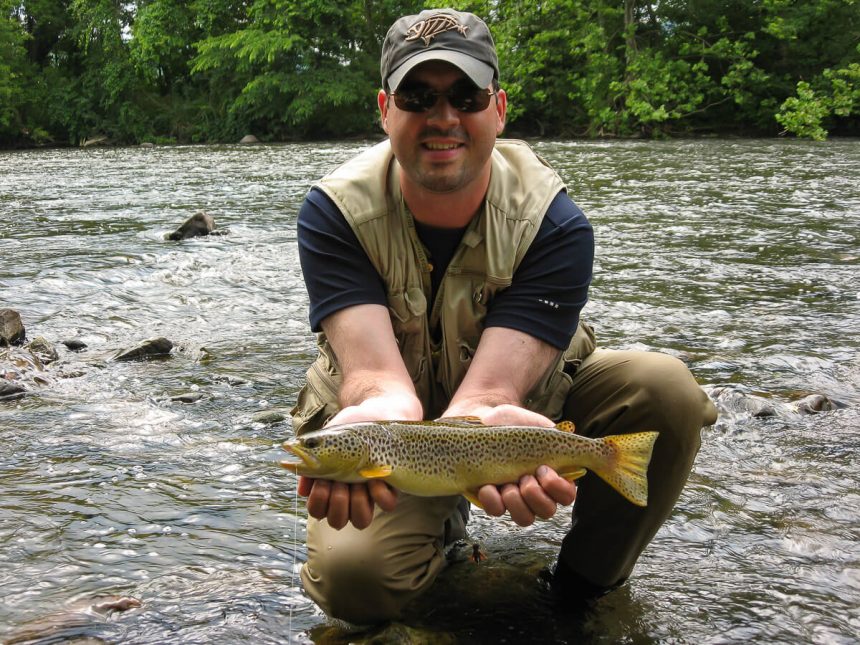 Sawyer, with another upper-teens trout. Photo from Steve Sawyer (2008) 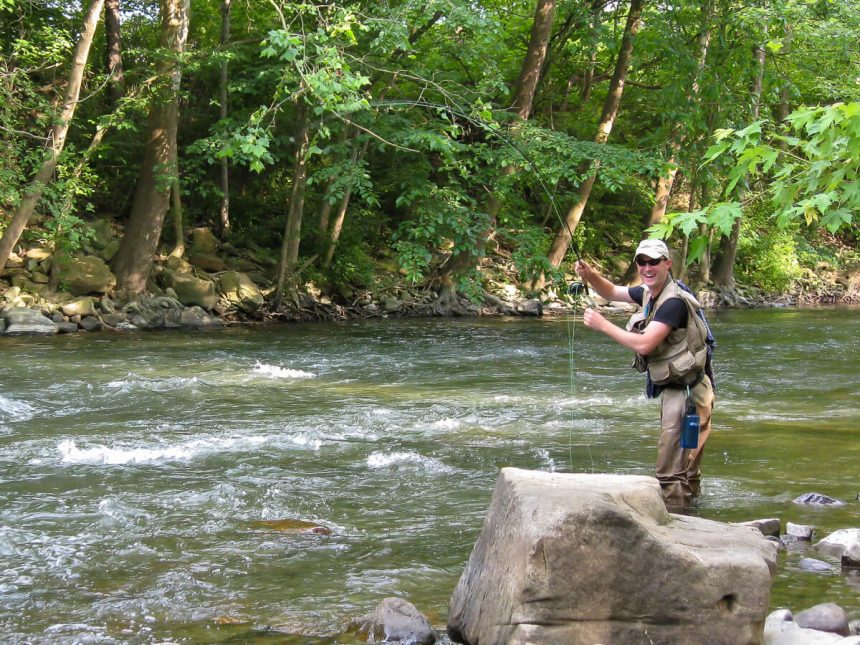 Lots of smiles that summer. Photo by Steve Sawyer (2008)

With that much time on the river, there were moments for a good bank sit — at least once in a while. And on this gorgeous morning there’d been so much fish catching that our wet hands looked like dried prunes.

Sawyer walked ahead and found a seat on a washed-up sycamore in the rocky floodplain upstream. A few minutes later, I was within earshot as I waded through an ankle-deep riffle to scan the new level.

We exchanged stories, and I made a few casts to the inside seam. It was marginal water in these conditions but a good secondary spot nonetheless — definitely worth a few looks. The two trout that came on a half-dozen casts proved my instincts to be correct. Sawyer got a rise out of every eat. And I released each fish quickly, as I was eager to make the next cast.

My friend and I kept talking. And I moved toward the middle run, picking up at least four more trout, all bigger than the first two, but none in the upper teens — the size that had become standard fare for trout that were eating cicadas on top. 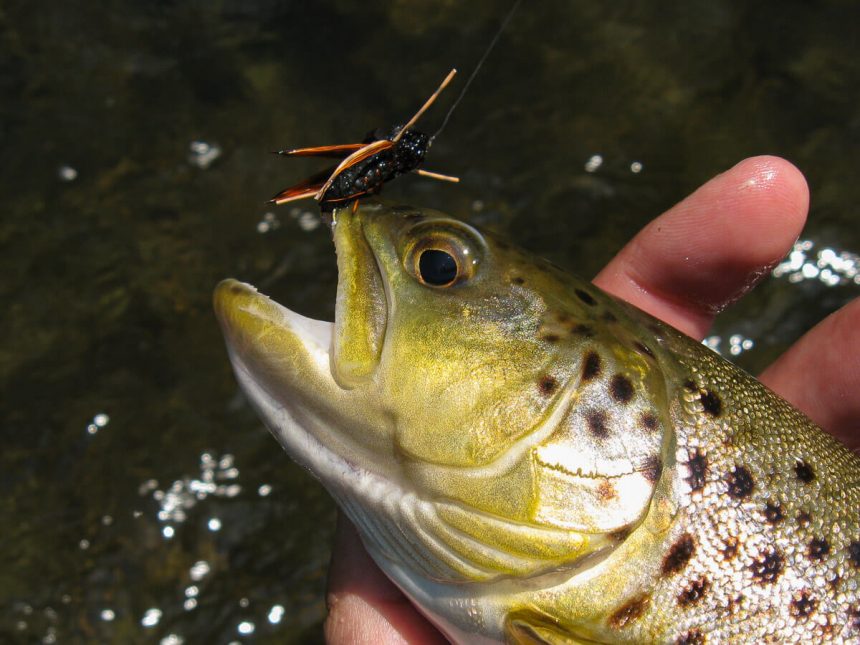 Sawyer questioned and pointed to the shady green bank-bucket against a filled in undercut, and I nodded while assuring him that I was getting there. I worked toward it and caught another pair on the edge of the best water, but not quite into it yet. Sawyer was really having fun with things now, and we watched each drift together, with a fisherman’s expectation that only comes from fast action on a river. Another trout, and I knew that Sawyer could handle the anticipation no longer.

“Alright, here we go!” I said to my friend. Then I waded another few steps bankside, just within range of the perfect, limestone green bucket.

Nothing on the back end. Then nothing on the near side. Nothing on the first drift that began in the riffly head and dumped into the center of the bucket either. When that drift finished, neither of us spoke. The trout would eat — we knew it was a sure thing. And that drift was good enough to fish over and over again.

Two identical casts later, a twenty-inch wild brown trout swirled the fly. Its bulging back bubbled through the surface just enough to bump the Cicada off the surface. The fly made a short hop in response. And after weeks of watching this kind of performance from top-tier trout, I’d trained myself to stand still and hold on tight. I didn’t move the rod or the line. I didn’t move my hands, my head or my eyes. Then, just as the Cicada settled again, with its deer hair wing coming to rest and its rubber legs still quivering, the pool boss came to finish what he started. His big head engulfed the fly, and my patience finally released into a sharp hookset on 3X. The stout hook buried itself against the weight of a big trout. After a strong fight, the fish of the day slid into my hand. It was an even twenty inches, and its belly was bulging with the chunky forms of unlucky, two-inch-long Cicadas.

The big trout reveled in the bug event that summer, and I swear that sometimes, trout were playing with their food. I believe that trout tried to sink the Cicadas, and then take them as they drowned under the water. This started late in the event, weeks into the madness. And I think trout found it easier or they had more consistency with the big bugs by creating a surface swirl that at least partially submerged the Cicada. We saw this often enough to consider it intentional and not a mistake.

I held the fish and waded over to show Sawyer the prize. And while I approached, he kept saying, “That was a clinic!”

I smiled, and I soaked in one of the best moments I’ve ever had on a river. From start to finish, every cast in that level went where I directed it. And with each drift, I had supreme confidence that a trout would eat. Everywhere a trout should hold and take a fly, at least one did. And I caught the largest fish right where he was supposed to be. 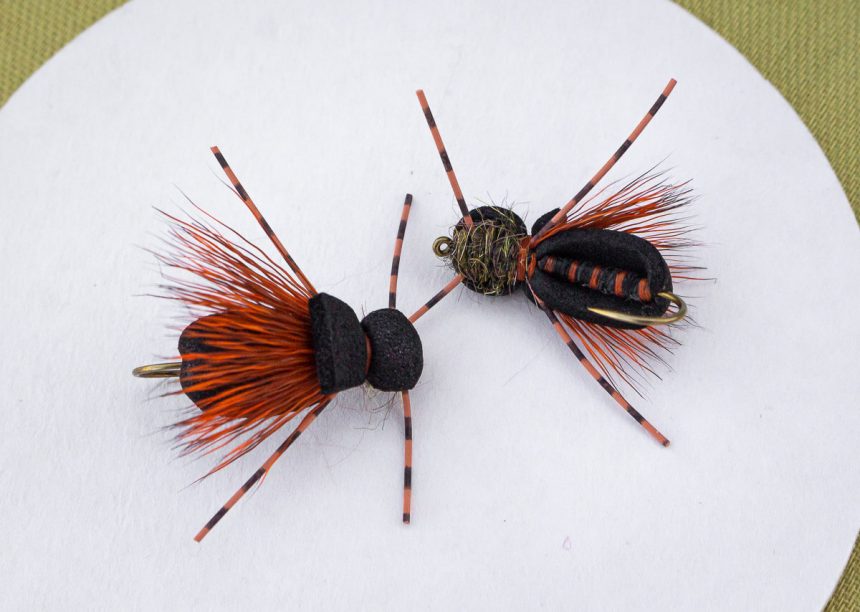 Here’s a good look at the Size #6 pattern that produced better than all the other big and fancy stuff: Black foam, rust thread for the banding, deer hair, peacock dubbing and rubber legs. I learned this pattern from Doug Wennick.

I didn’t carry a camera back then. And while I still appreciate the purity of that approach, I do wish I had a record of those days with one of my best friends on the water. But I do have the memories. And I can still tell the stories. So too, Sawyer and I can make plans for 2025. Seventeen years should provide enough time for anyone to clear their schedule for a couple weeks. Right, buddy? 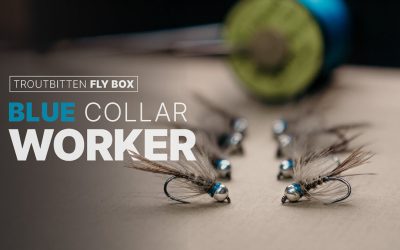 Show up on time, do your job and have a little fun while you’re at it. Then go home and do it all over again tomorrow. That’s a blue collar worker. It’s a Pheasant Tail with a CDC collar. It has a little disco for the rib and a hot spot collar. It’s simple, reliable and effective . . .