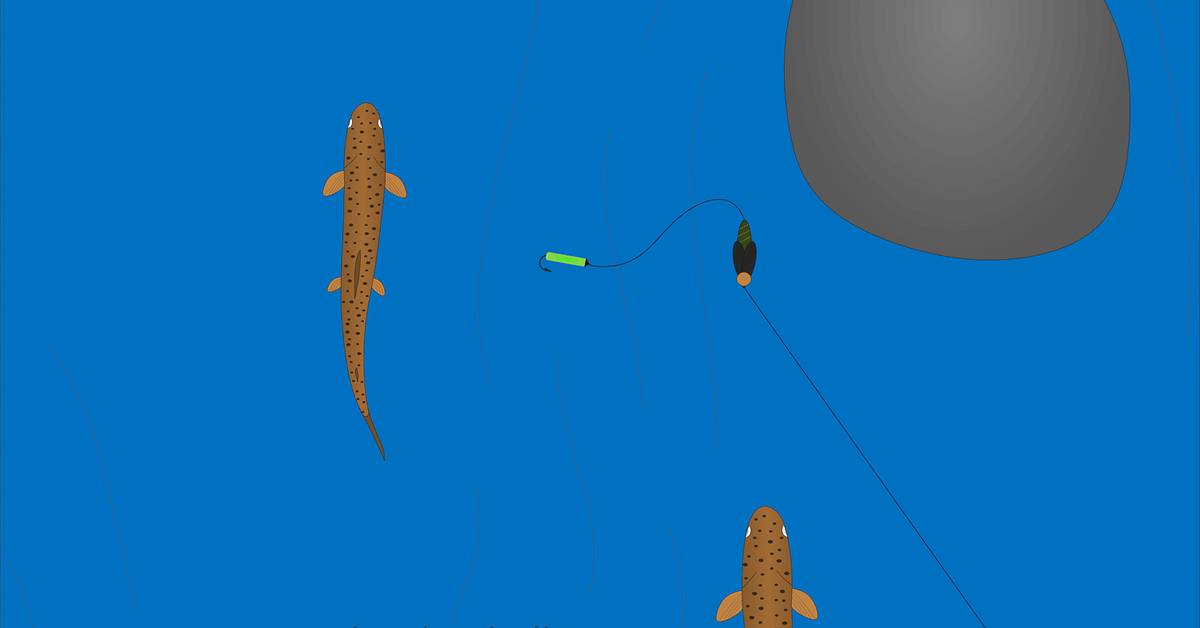 Trail This — Don’t Trail That

Last week, my friend sent the picture of a plump, wild brown trout, including the caption, “He took the Green Weenie off the trailer, just like you said!” And I immediately cringed. I never run the Weenie off a trailer — unless it’s very small, beaded and tied with fine chenille instead of medium. Isn’t life complicated?

If you don’t know what a Green Weenie is, by the way, this may not be the post for you. Tune in next time for a story about fishing. This one’s about tactics.

In these posts, I try to dig a little deeper than the “Nymphing 101” kinds of articles that you might find elsewhere. In fact, the small intricacies of rigs and methods that I write about are often the kind of things that will help catch just one or two extra fish in a full day. But I forcefully believe that many of these small adjustments add up to big results. Put them all together, and you’ll catch many more trout in a day.

A while back, I posted about Tags and Trailers. Going back to read that one will really help in processing this one. Please note: I prefer tag droppers in most situations, but I run trailers for a variety of reasons. 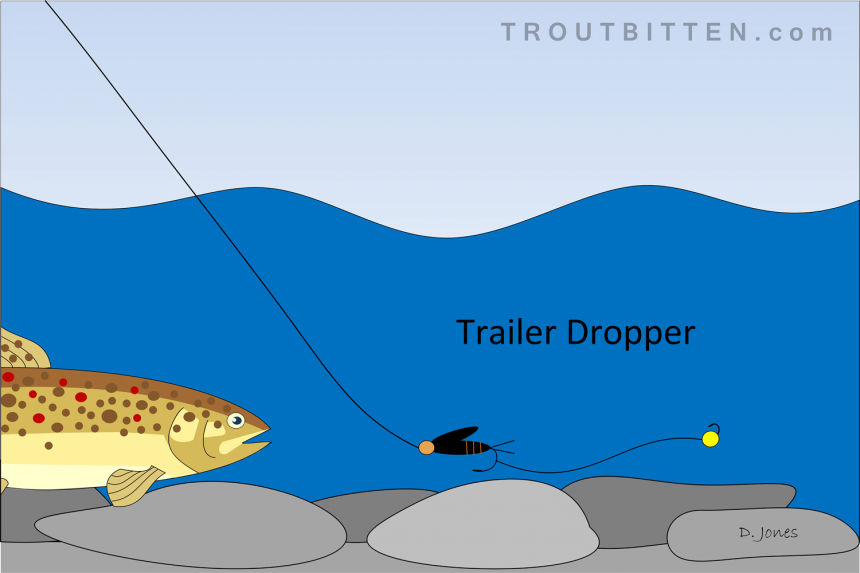 A trailer is a nymph that rides along with its parent fly or anchor. It is lighter than the parent fly andis guided along the river bottom by following (trailing) the larger and heavier fly.

I use the term “parent” almost interchangeably with “anchor.” Point is, it’s your main fly. It’s the one you are in touch with, the one you are fishing, the one you can feel, and the one that provides the weight to get down to the bottom. I do use split shot instead of weighted flies sometimes.  I keep the split shot as close as possible (4-6″), and I still consider the parent fly to be the first one after the split shot.

Use small, lightly weighted, slim flies as your trailer. Large, bushy or unweighted trailers don’t track as well behind the parent fly, and they are easily tossed around by the currents. That either causes slack between the parent and the trailer, or tension is created, pulling both flies out of their natural drifts. Slack equals poor strike detection. And a nymph drifting unnaturally equals fewer bites. What a large, unweighted, bushy fly does on a trailer isn’t good. 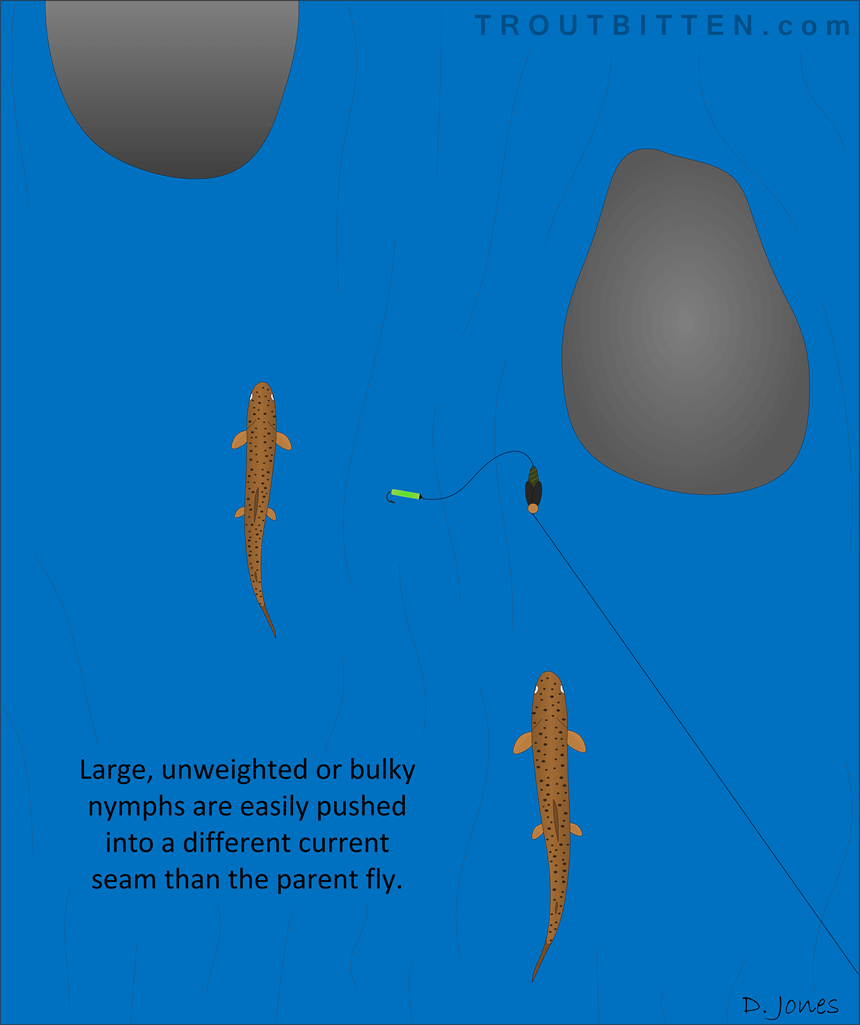 You can easily see this demonstrated in low, clear water. Use a visible parent fly, and then attach an unweighted Green Weenie as a trailer. In mixed currents (as in pocket water) you will see the Green Weenie drifting all over the place. It can end up anywhere within the trailer-line radius of your parent fly. Not good.

Now tie on a visible trailer that is small, slim, and lightly weighted. I know, most are hard to see — try wrapping a cigar shape of chartreuse thread on a #14 hook, just for the test. You will find that the trailer now tracks behind the parent fly much more often. The natural drift of both flies is better, and the strike detection is improved. Is it perfect? Certainly not. Life is a struggle against imperfect things. 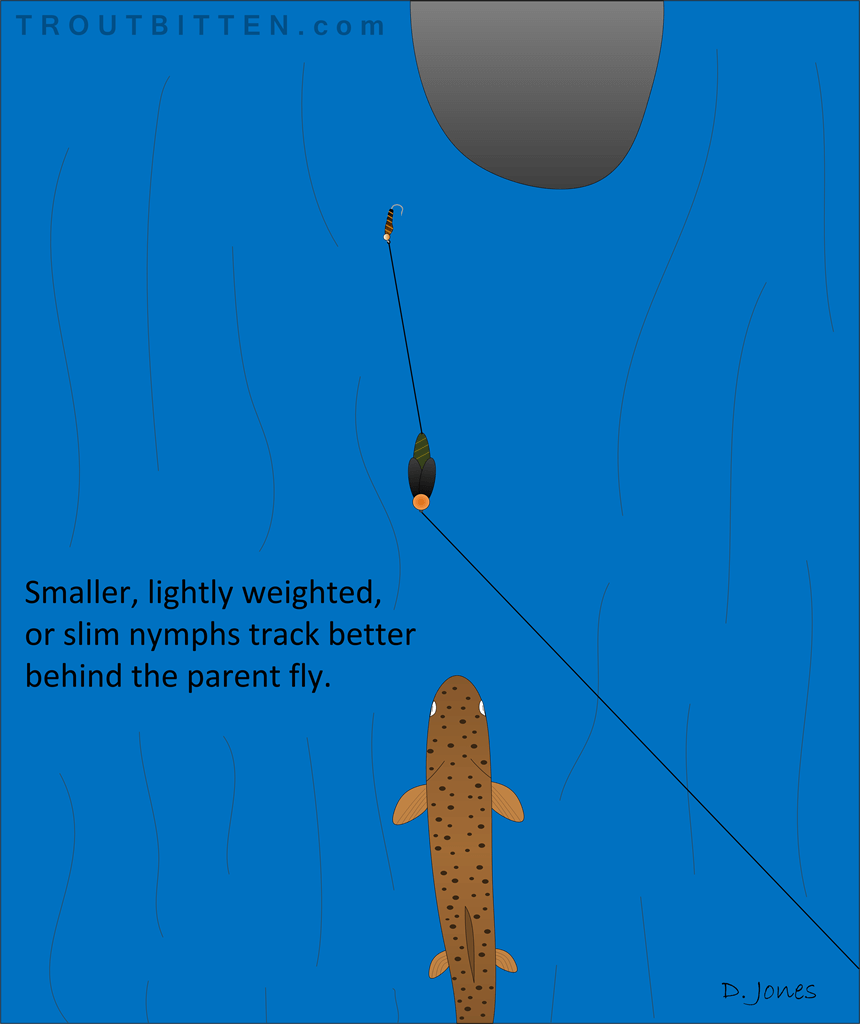 Some of my favorite trailers are Pheasant Tails, Walt’s Worms (tied tightly), small cress bugs, RS2’s, Zebra Midges and WD40’s. You’ll notice that none of those patterns fit every requirement of small, slim and lightly weighted. They don’t need to. As long as they are not the opposite of all those descriptors, then you probably have a good trailer. The WD40 is not weighted, but it’s small and slim. The Walt’s Worm is not slim, but I usually add a brass bead to the ones used for trailers. However, I don’t use big stoneflies with appendages or full-hackled Wooly Buggers as trailers.

A lot of this started years ago, when my friend, Pat Burke, was nailing fish on what I’ve now started calling the Bait-and-Switch. The idea is to trail a small, natural nymph behind something large, colorful or otherwise attention getting (e.g., trail a Zebra Midge behind an egg pattern, or trail an RS2 behind a stonefly). The Burke rig has become my favorite way of presenting small nymphs, size #18 and under.

Trailing the right flies helps keep both of your nymphs in one lane under the water. And that keeps your flies looking natural down there, improving strike detection.

Of course other ways work. You will catch fish trailing large, bushy, unweighted flies. But I think we should be careful about what we learn from an experience. You may catch a trout trailing the Green Weenie, but what if you could have caught three of them doing it the other way?

The Mono Rig and Why Fly Line Sucks
Tight Line Nymph Rig
Sighters: Seven Separate Tools
Learn the Nymph
Tags and Trailers
The Backing Barrel
Take Five
The Add-On Line
One Great Nymphing Trick
The Trouble With Tenkara — And Why You Don’t Need It
It’s a Suspender — Not Just and Indicator
Stop the Split Shot Slide
Trail This — Don’t Trail That
For Tight Line Nymphing and the Mono Rig, What’s a Good Fly Rod?
Depth, Angle, Drop: Three Elements of a Nymphing Rig
Over or Under? Your best bet on weight
Modern Nymphing, the Mono Rig, and Euro Nymphing