Get me to a beach, put me on the surf with a fishing rod, and I’m all at once intrigued and mesmerized, lost and captivated by the endless questions presented by complex currents and mysterious fish.

While bay waters have their charm, I wish more for uninterrupted hours hucking bucktails and soft plastics into the Atlantic. The churning waves, the cuts, troughs and sandbars of beach water mimic the flows of a good river that is full of structure. And tearing apart the differences to find the similarities between the two water systems is a challenge that’s renewed with each trip to the salt.

Our family beach vacations are now fishing trips. Thankfully, I have two boys who love the strong pull of ocean fish and a wife who kindly tolerates my fishing, every morning and every evening.

We visit LBI, New Jersey, every summer. And what I’ve learned in the last four years since I started fishing the surf has finally solidified into something I can lean on. Because, as we crossed the bridge toward the mainland a few days ago, at the end of a week-long stay and with the ocean winds behind us, I finally felt satisfied. For the first time, I’d found some consistency — a success not based on the numbers or the size of fish, but on the knowledge that I’d fished well. And in the last two days of our trip, every shift, both mornings and evenings, produced fluke (summer flounder) like I’d never seen on the end of my line.

It took four years to have that feeling just once. And who knows if I’ll be able to pick up where I left off when we return for striper this fall. I hope so. But this is fishing, and modest gains are fleeting. Then again, I feel like I finally set a baseline for both reading the water and having a feel for where my lure is in the column. And these should be skills that don’t evaporate with the next challenge. 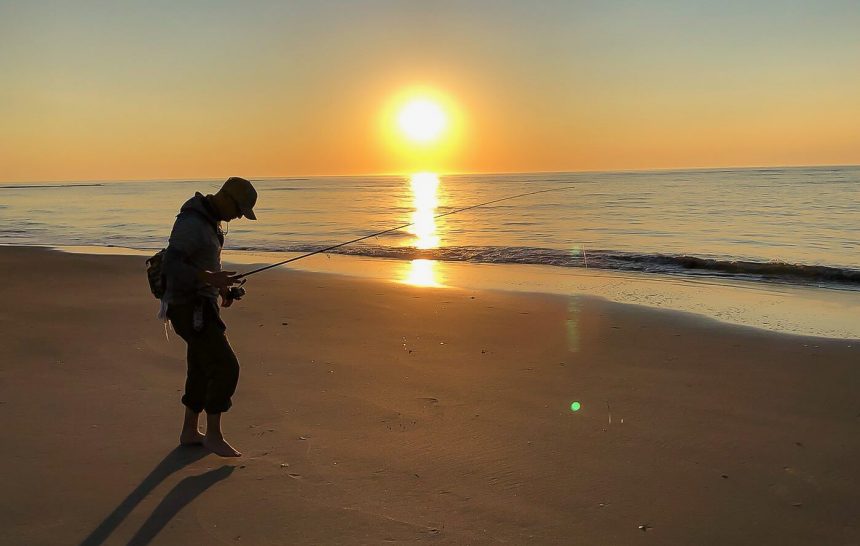 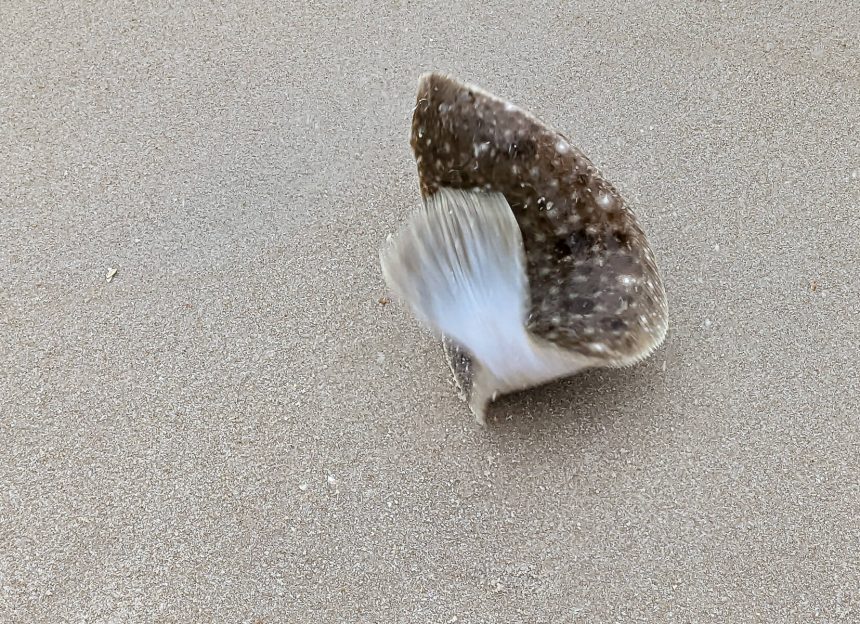 The key to it all was finding the strike zone. I give the same name to that cushion of water near the bottom but on it, back here in our trout rivers. And whether I’m fishing nymphs or streamers, my underwater flies most often must find that targeted water to convince a fish.

Fluke in the ocean, it turns out, are not all that different. Get it near the bottom but not stuck on it. Don’t touch too often, and don’t pause the bucktail. Instead, jig and swim the baitfish imitation in a relatively narrow range of the water column that’s pretty low, but not too high either.

In my first year of fishing saltwater, I was overwhelmed with a flood of information and tactical choices. It was my own fault really, for trying to assimilate too many quality resources and seemingly complex methods. I fished a high-low rig. I fished bait, Gulp Mullets and some tins. I did best that first season with the high-low rig, because the drop shot method was familiar, and it provided me with a reference for the bottom — some kind of familiarity in a magnificently puzzling mess of waves.

I spent year number-two focused on bucktails with teasers on a tag, and I now understand that I was at least twice as heavy as I needed to be. Year three was a combination of everything I’d learned, and I was once again overwhelmed with options. So I went into this year with a new determination and some specific gear designed to fish lighter. And while the Jerk Shad and jigging approach didn’t produce much in the first half of my week, I finally learned to feel the currents. Eventually, I realized I could close my eyes or fish after dark and still know where my lure was by feeling the load on the rod tip. That sensitivity was gained only by time. Gliding above the undertow is not something I could have understood before now. I needed to get it wrong about ten-thousand times, and then finally get it right another ten-thousand more.

At mid-week, I drove to Stone Harbor to meet Austin, who was also on vacation with a fishing rod. And I remember saying to him that I felt like I was finally fishing the surf well. I was doing what I wanted to do with the lures, but it wasn’t yet producing. So then, four days into the trip, it was time for a significant change. And I refocused on the bucktails from years past. 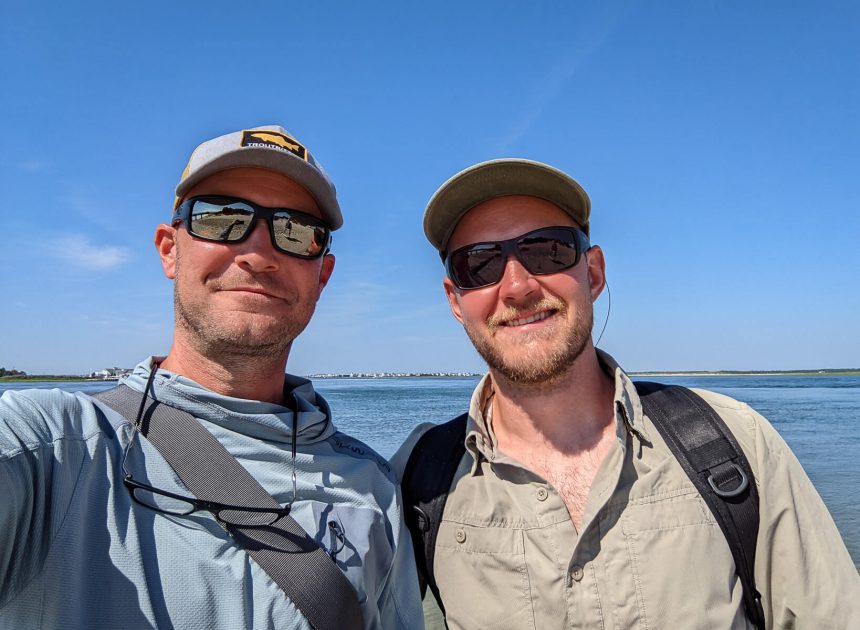 With bucktails, I would do more swimming and less jigging, with slower presentations that varied more as I matched the lure motions to the speed and depth of the waves. It felt identical to what I call a Crossover technique with streamers in my favorite rivers. And with that match made and processed, I finally launched casts into the ocean with confidence. And the fluke followed. 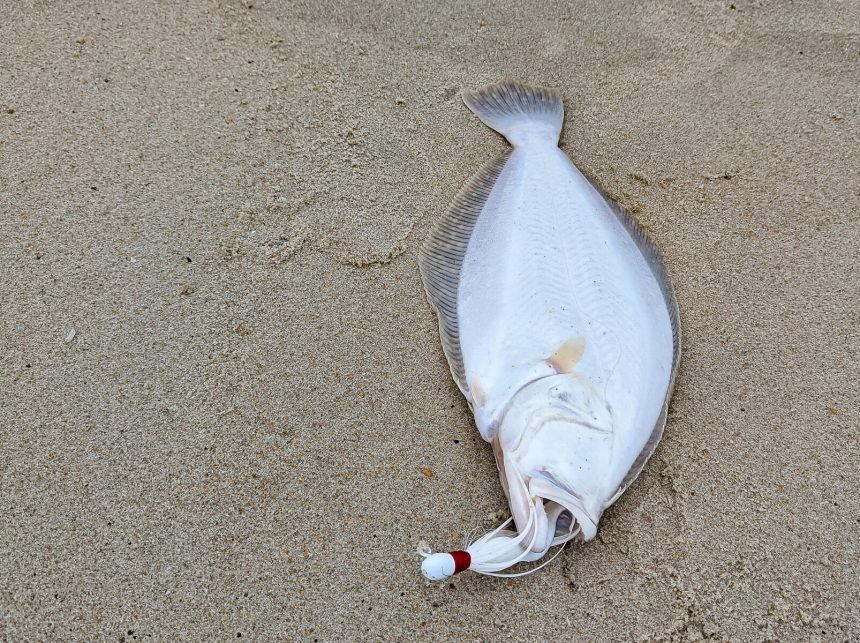 Joey, my oldest son, had been fishing bayside in the evenings with his brother, Aiden, as they were captivated by catching brown sharks. But hearing of my improving success, Joey joined me on our last evening to try the bucktails together. When I’d landed a handful of fluke and missed as many more, Joey looked at me thoughtfully and said, “Okay, Dad, you’re definitely doing something different than me. What is it?”

I told him about the strike zone. I suggested that he was probably relying too much on bottom contact and suggested that he should trust the rod tip for feedback. We talked about the similarities of where we try to put nymphs and (often) streamers back home, and he seemed to get it. Then, about ten minutes later, Joey was into his first fluke of the night. There’s really nothing like that feeling of landing fish together with my son. Success continued, and we fished well into the dark before walking along the cool sand, back into the streetlights. 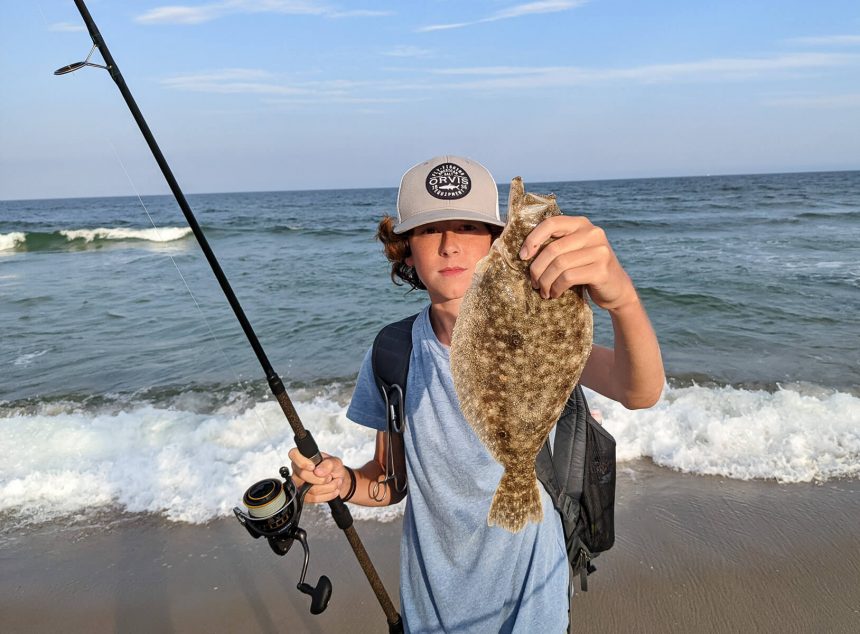 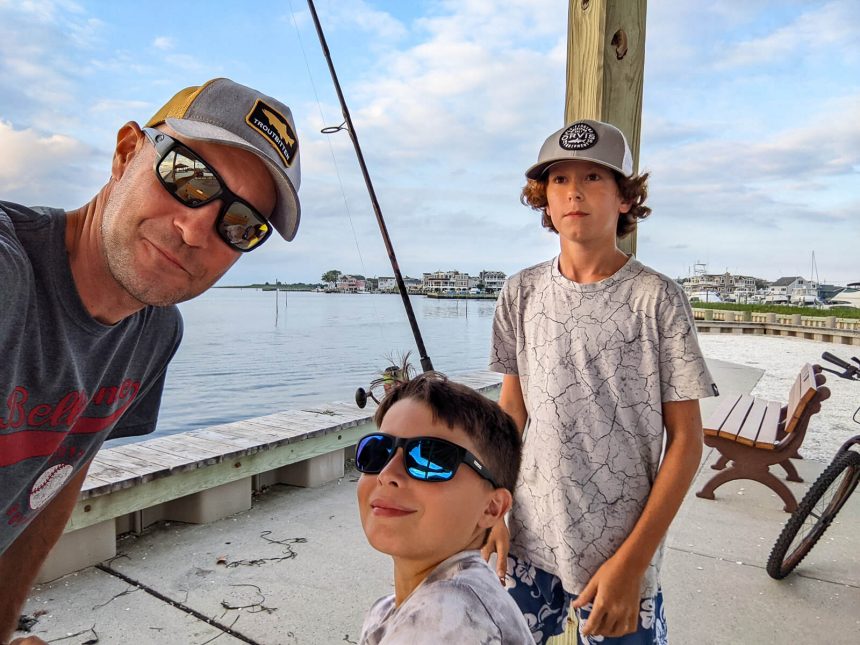 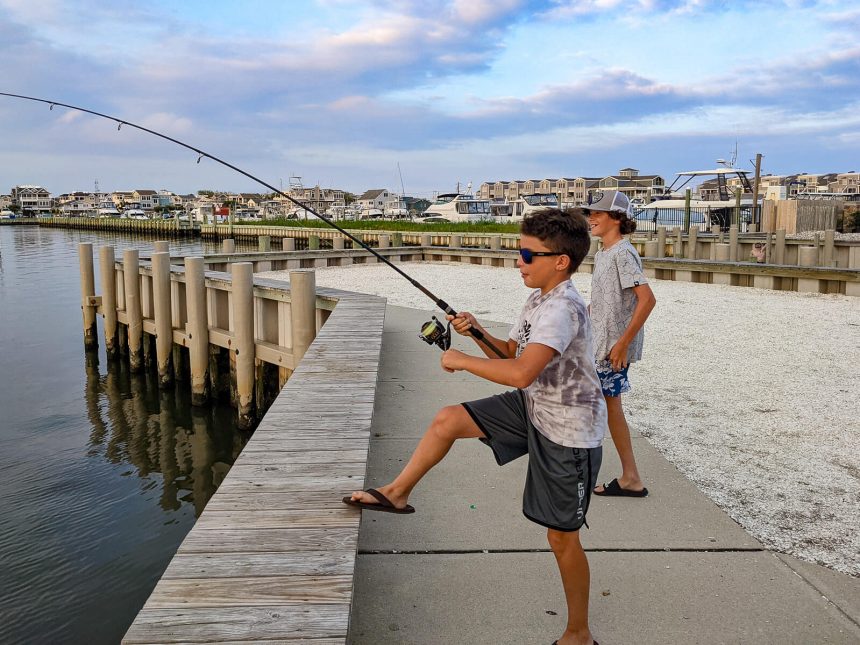 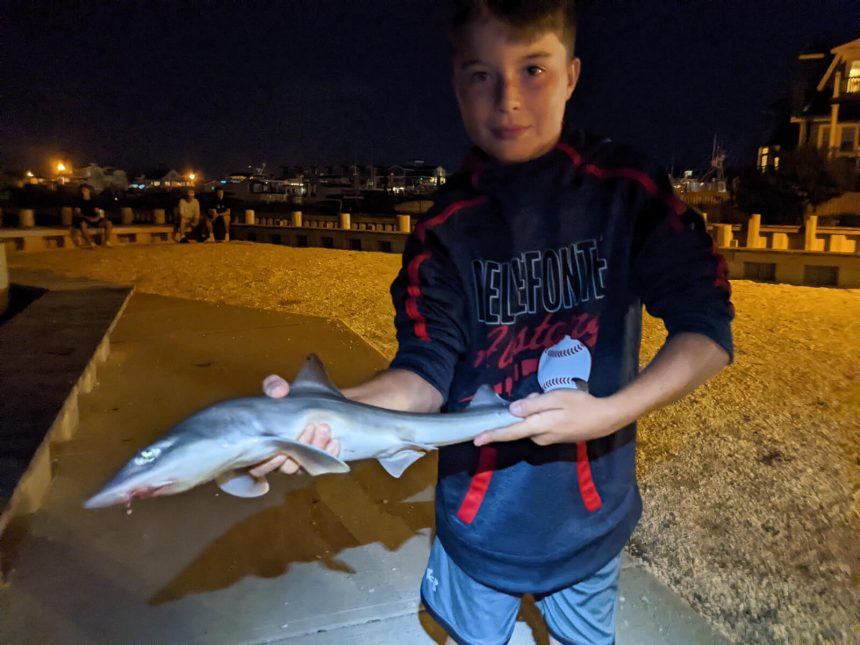 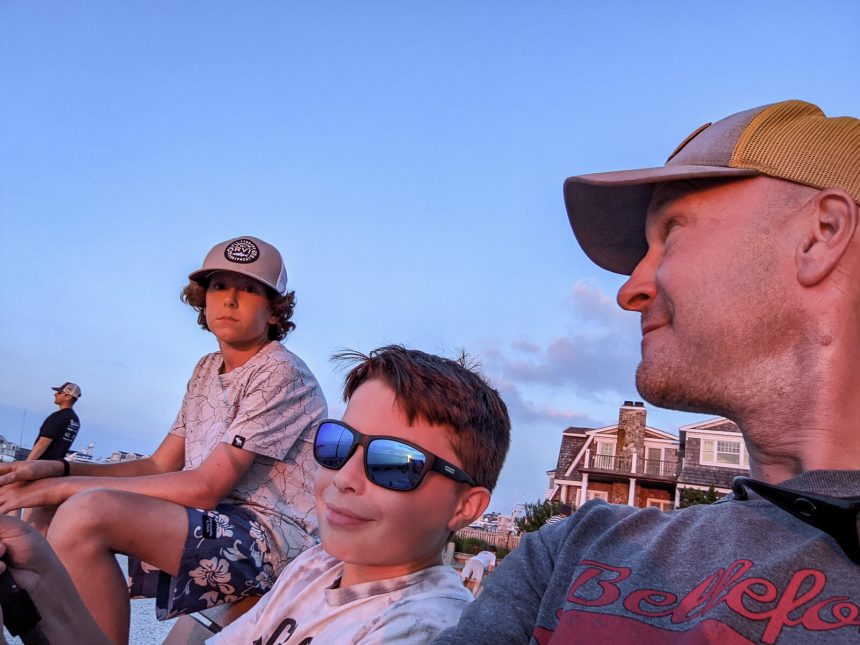 On my trip with Austin, he asked me why I don’t fish a fly rod in the surf. And I told him because I didn’t feel it was the best tool for the job. That’s true. For the presentations I want to achieve, the fly rod and fly line is a handicap.

But that’s not the only reason. I enjoy revisiting the spinning rod tactics of my youth. I fish Rapalas and in-line spinners on occasion back home too. Because what I learn from working with different tools provides a more complete picture for my favorite tactics. It inspires new ideas for presentations, for fly design and leader formulas. And there is no shortcut for this kind of learning. Time with these varied tools is the only real teacher.

So, I know I’ll look back on this summer trip as the point in time when I had my first real breakthrough on the surf. Sensitivity was the key — along with learning to trust those senses. And while extra weight was needed for the deepest and roughest parts of the ocean at high tide, frequent adjustments in bucktail size and even the fullness or sparseness of the deer hair finally made sense — the changes seemed intuitive. 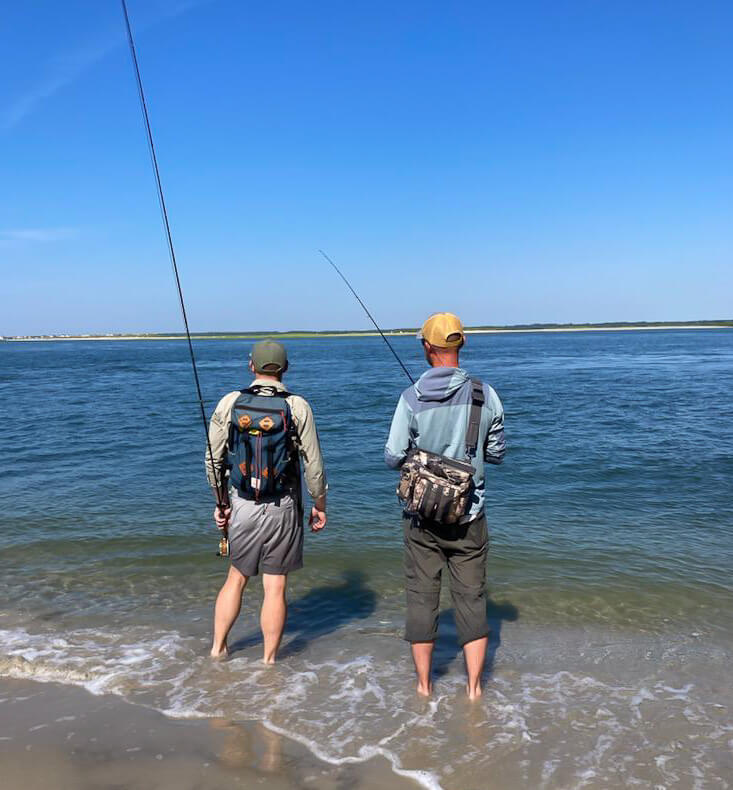 Along with that, my modest success was the fruition of constant adjustment and a persistence to follow through with one tactic until I was sure I had it right, regardless of any fish tugging on the line.

My time spent away from the fly rod every summer is an invaluable education. It’s also a mental release. Something about wearing flip flops everyday invites a little more freedom into the heart. Walking in wet sand forces me to slow down. And long moments spent with my family remind me why I do all of this in the first place.

** NOTE ** If you are an LBI regular or a NJ surf fisher, please get in touch. The salt is a mystery to me, and I’ll take all the guidance I can get. Everything Has a Flip Side

What do you believe in? What can you fish hard enough and long enough to effectively convince a sluggish trout that it’s hungry? That’s the fisherman’s confidence. And it beats out the hatch chart, the guide’s advice and last week’s river stories every time . . .