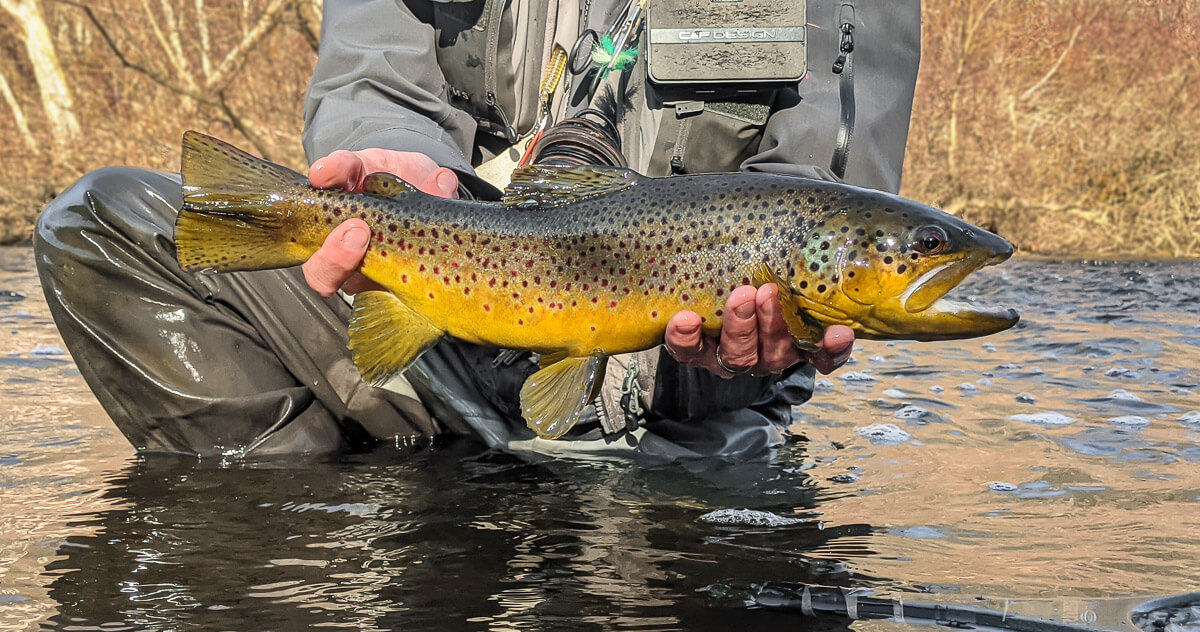 Walk Along — Jiggy On The Northern Tier

** NOTE ** This article is part of the Walk Along series. These are first person accounts showing the thoughts, strategies and actions surrounding particular situations on the river, putting the reader in the mind of the angler.

It’s dark in the garage, and I haven’t done this for a while. In the thin light of the 4Runner’s hatch, I double check that everything’s in place before closing the lid and sliding into the cold driver’s seat. With a 4:45 am departure, my boots should be wet just as dawn breaks — and I’ll meet the trout at first light.

In my rearview mirror, I watch the garage door slide closed before I put my foot on the accelerator. It’s been a while since I’ve set out this early for a solo trip, and I have high hopes for a piece of water that I haven’t fished in two years. With a full tank of gas and a hot cup of coffee, they’ll be no stops until I hit the river — just a long drive north, dodging deer until daylight.

When dawn breaks, my tires crunch and grind over dirt and gravel in a small pull-off used by hunters a few times a year but not by fishermen.

I pause after my first boot lace is tied. And while looking up through a cloud of warm breath, I blow into my wool gloves a bit, slowing down to listen. My favorite run is two-hundred yards through the hemlocks, and I hear the murmur of moving water, teasing and calling me through thinning twilight.

Even after my walk, it feels cold on the river. But I expected that. I’ll start with the streamer that I ended with yesterday evening, still strung up, because it’s just bad luck not to.

On the second cast up and across a trout flashes from behind a boulder. Not a bad start. But give him another look, with a head flip. Now stall it this time right at the merger seam off the corner of the rock. And wait, wait, let it fall . . .

The sighter is all I can see when the streamer is deep, but I know where it is — four feet to the fly, because the sighter has contact. Good. Maintain tension and watch for the slow down on the colored line. There it is. The fly’s in the strike zone. Now speed lead it the rest of the way down the seam. Nice.

That looked good. No hits, but I’m glad I found the strike zone here, because I’ve set a baseline. Without seeing the bottom, I’m able to ride above the riverbed on the next half-dozen drifts. Deliver up and across, find the cushion when the sighter slows, and then speed lead it through. These are good drifts.

I’m spreading it around now. And my feet keep moving. Without taking my eyes from the water, I feel the riverbed with my feet. I’m mobile — constantly wading upstream through knee-deep water while giving a few casts to each lane and dark pocket close to good structure. Keep moving. 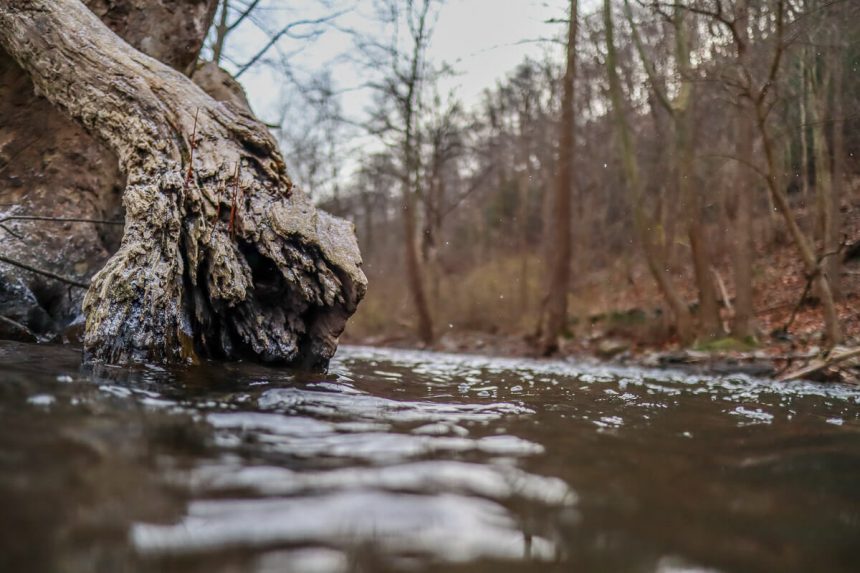 My feet are finding potholes — depressions up to twelve inches deeper than the surrounding riverbed. I don’t remember many potholes in this stretch, but I haven’t fished it more than a handful of times either. These potholes are their own type of structure. And I’ve landed some of the best fish of my life from good potholes that are nearly hidden — revealed to the perceptive angler only by a minor slick on the surface.

A quick wrist flip-and-strip delivers the streamer to my line hand. Clip. Zip. Place the Half Pint into the working streamer box and pull out a Craft Fur Jiggy. Davy Knot. Pull. Clip. Cast. I make the change in seconds.

With the right weight, any streamer can be encouraged to dive through the water column and jig. And using the Mono Rig today allows for precision of fly placement. The Half Pint streamer that I started with dropped into place often enough for the speed lead, but nothing rides the bottom like a lead ball jig, and the first drift on the Craft Fur Jiggy makes me smile. For the first time since tucking my kids into bed last night, I speak aloud. “Well, that’ll ride through the potholes . . .”

It does. And instead of relying on the sighter to signal the strike zone so much, I start using the jig to feel the bottom. That’s its strength. The super power of a lead ball jig is feeling the bottom and riding over it. I feel the ticks on rocks. A tungsten beaded jig of equal weight would hang too often with this tactic. Only lead does this just right.

Tick and glide. Tick and glide. Another cast. The next seam. More wading. And now pause. This spot is too good not to move a trout, and it’s my first piece of prime water. I’ve had my heart set on it since I entered the water a half hour ago.

And for the first time since the walk in, I lift my head to look around. The sun is up now. It’s still behind the ridge and masked by clouds, but Sunday has made its appearance. And I’m thankful I’ve made the trip. The morning is mine, and I have until noon to forget about everything else.

And I do. It’s just me and the mountain, with the river as our companion.

The Craft Fur Jiggy coasts into the juiciest part of the glide, under the dancing bubbles of a foot-wide seam. I see the darker water of a channel below and let the Jiggy find it. There it is! I’m on edge for this drift, ready to set. Now tick and glide through. Strike!

Nothing. But I’m glad I set the hook. One of the other ticks that I felt on the way through may have been a strike. And that’s the trouble with relying on feel. It forces me to guess a lot. But that’s my strategy right now, and I’m sticking with it. Heighten the focus.

Cast again. Feel the current push on the line as the Jiggy sinks. With my index finger on the rod blank I sense the slightest nuances in this long leader as it rolls over my trigger finger and into my line hand to pick up slack.

I missed the channel that time. The sighter never slowed, and the Jiggy ticked just once. Cast again, and think about a dead drift at first. Tuck. Lift just the slack coming back. The rod elevates. The fly finds the zone and then ticks. Good. Now lead through.

That trout took on what was mostly a dead drift, broken up by the stops and pauses of touching rocks. So I cast again and repeat the look.

Another hit! Both of those were subtle. But the fish are in this prime channel. Two trout were willing to hit, and that’s good feedback, so I adjust.

Tuck it in again. Now find the bottom within a second or two. There it is. Ride through the channel and sink into the potholes. Touch less by adding a jigging motion. Too much that time, and the drift is over.

Refine this. Make it better. Repeat. Smaller jigs. Five inches, at most, and then let it fall until the touch. Do it again. There’s room for about four jigs and drops before the drift finishes out below me. Cast, drift. Tick and glide. Fish on! 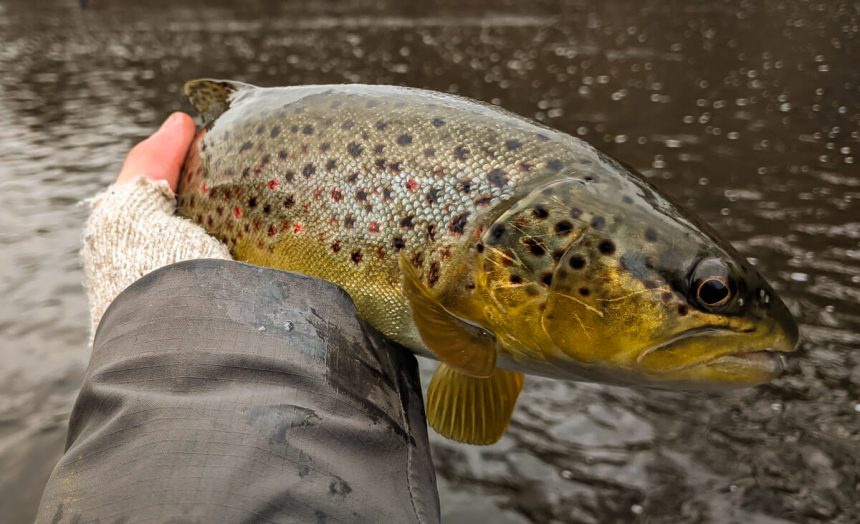 Sixteen inches of wild brown trout. A fine fish that hit on the drop. Not what I’m looking for, but he’s big enough to give me some data. He took the fly on the jig-and-drop. So I’ll repeat it.

About five more casts through the main chute under the bubbles, and then I’m mobile again. I move on because I can’t be stubborn with a streamer at the end of the line. The next prime water is a softer chute, but if I’m careful, I can repeat the same successful look on the Jiggy.

Tuck cast. Drop. Tick. Jig. Drop. My line hand retrieves the slack. And now, in this slower water, I’ll use the line hand for the jig, because the rod tip motion is too much. But first . . . locate the bottom.

Next cast. Tick. Now lead downstream. Slower. No, even slower. Match the water speed. There it is. That’s the strike zone. Now cast again to the same spot, tick this time and add the jig with the line hand. Tuck. Drop. Tick. Lead. Now just a five-inch strip with the rod tip up. Maybe less. Pause the lead ever so slightly for the fly to drop. Then repeat.

Focus. Another jig-and-drop before the drift ends and . . . HEY NOW!

Fish on. Fast fight, and a quick pic. 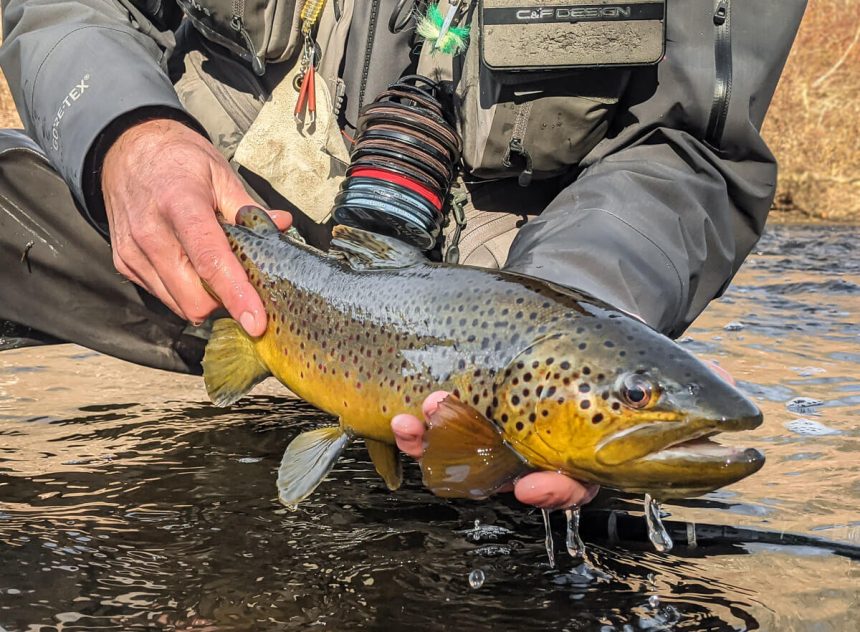 That’s the one I came for. 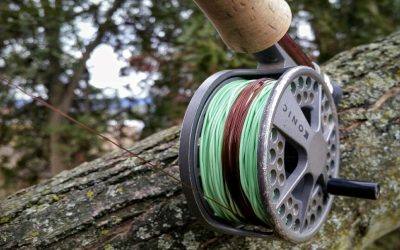 The Mono Rig and Why Fly Line Sucks

The Mono Rig is a hybrid system for both tight line and indicator nymphing styles, and for streamers, dry-dropper and dry flies, all while using #20 monofilament as a fly line substitute. 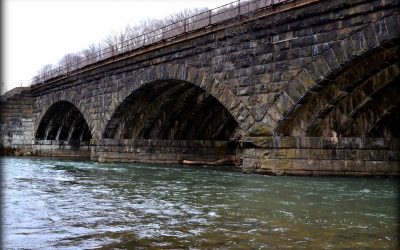 The tall man crossed the old railroad bridge above me. He paused at the midpoint, lingered and watched me cast for a moment, then he bellowed downstream to me with a voice full of triumph. “I caught a bunch! They’re taking Zebra Midges just under the surface.” “Not... The Mono Rig is a hybrid system for both tight line and indicator nymphing styles, and for streamers, dry-dropper and pure dry flies. I push the clutch, cut the engine, and slowly coast the last fifty yards through the dim yellow of my parking lights, easing the truck through road dust that has circled up from behind me—now traveling faster than its cause—and carried by a November breeze that will... 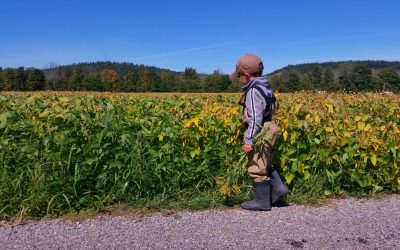 Gonna let the pictures tell most of the story today. We've been enjoying the cooler weather in the last month or so, and the boys have been putting a twelve foot Tenkara rod to good use. My parents bought the rod for the boys' birthdays, and the length of the rod,... 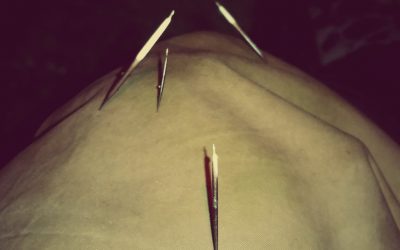 So I was startled, but not surprised, when something heavy hit my legs in the dark around midnight. Fishing to the banks upstream while standing in the swift middle current, the hefty thump happened so fast that it was past me and downstream before I could move. That was too soft to be a log, I thought.

I flipped on my headlamp and looked downstream to see a porcupine returning my wide-eyed gaze. His head turned, and he glared back, as if the hit-and-run was somehow my fault. I almost expected him to flash a middle finger, but I guess he needed both paws for swimming . . .