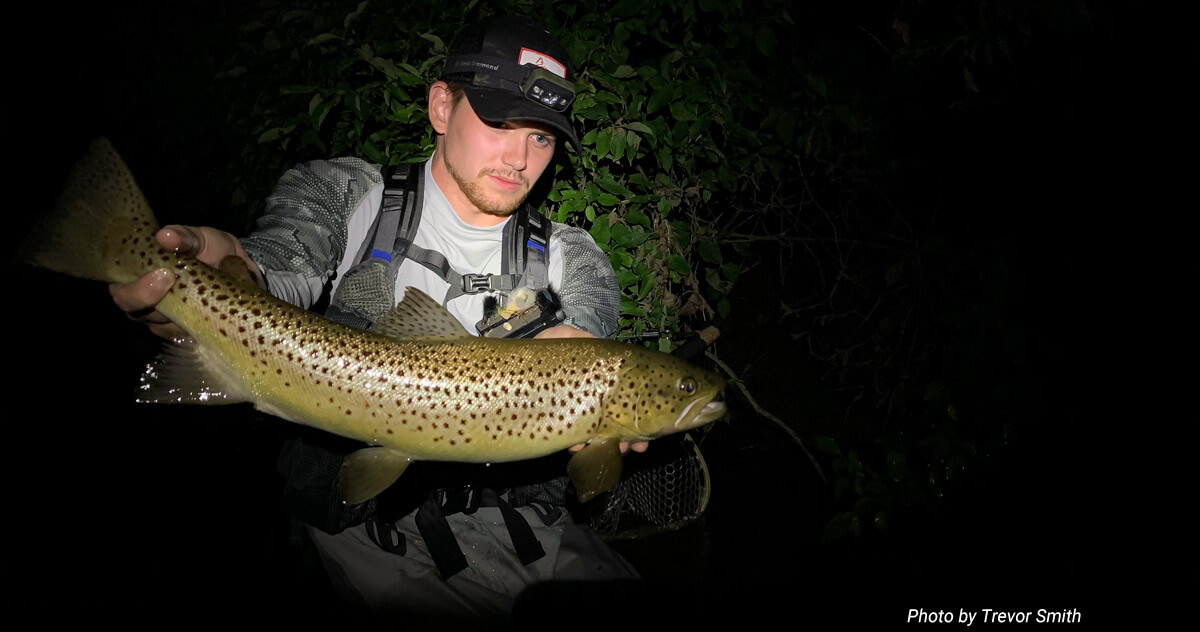 ** This Troutbitten article is part of the Night Fishing for Trout series. You can find the full list of articles here. **

I don’t night fish with others much. In fact, I can easily number the times I’ve ventured through the dark with a fly rod in the company of another angler. I guess I learned early on that if I waited on companionship for a trip that starts after bedtime and ends at 2 A.M. I’d be twiddling my thumbs and wishing more than fishing.

Going it alone is the standard after dark. You probably won’t find a good night fishing buddy, so don’t bother looking for one. Nobody night fishes on the regular for long, and I have zero close friends who are dedicated to it. Hell, now that I’m retired from the music gigs that I played for sixteen years, it’s harder to run the night shift myself. I’m an up-at-dawn guy now. But I still itch to tackle the darkness a couple times every week, especially in the summer and fall seasons.

I night fished with my friends, Josh and Trevor, last week. We all caught trout, but something was missing. And I know what it was.

I walked in with my friends the other night. And instead of slipping quietly through the deep shadows of hushed pines and wondering what was beyond my darkened perimeter, I walked at Josh’s pace. His tall frame walks faster than mine. Trevor lit his lamp longer down the trail than I do, too. So the mysteries ahead were illuminated, and much of my wondering was burned away.

With three people, the inevitable cross-talk was enough to keep the ghosts of a forest at bay all night long. I heard no coyotes. There were no owls in my ears. No deer or herons were flushed from the shallow water. That rush of panic from being startled in the darkness . . . was never encountered. The challenge to overcome it never came. In short, it was easy times out there.

I finally have an honest understanding about what draws me into night fishing. Yes, it’s the fear. And of the serious night anglers I’ve known, it’s the same for all of us. Fear is the crackling spark plug.

It’s that edge-of-your-seat feeling that keeps us going back — like watching a suspense-filled horror flick. It’s knowing that anything can happen at any time, whether it’s the largest trout of your life clearing the water and splashing down with your fly in its mouth, or an unseen beaver brushing against your leg. Fear, and the challenge to overcome it, is as tantalizing as the tactical night fishing game itself. Tamping back the nagging questions about what lies beyond our perception is as much of a draw as learning the habits of trout after dark. 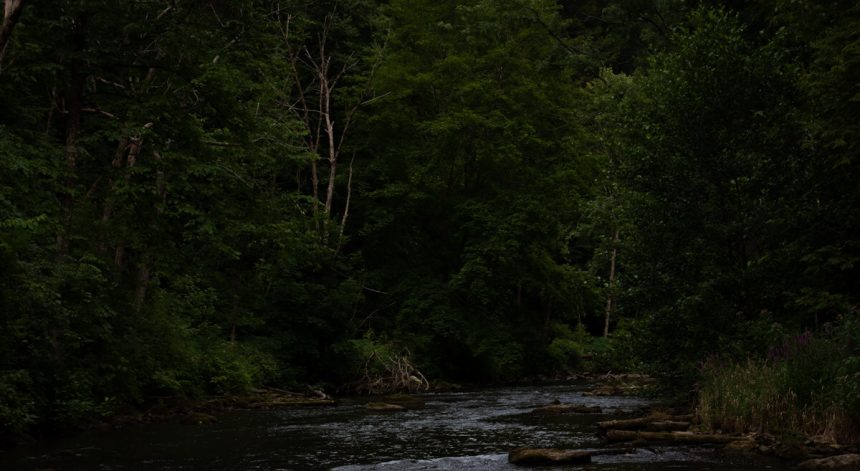 Trevor and I fished yesterday morning, during the regular, civilized, normal people hours. And on the way home we reflected on all of this — on how solitary night trips are another world altogether. It’s just different when you’re by yourself.

He said our natural fear of the darkness, combined with our guesses about what might happen out there present a constant state of fight or flight. I think that’s true. And it took me seasons under a black sky to be truly comfortable in the dark. I don’t know that I’ve ever overcome the fear, either. I’ve pushed it down to another place, but it’s still there. The door remains cracked, and it’s the thrill of keeping those ghosts at bay that motivates me to wader-up in the dim red light of my headlamp.

From the passenger seat, I finished the cold coffee in my morning mug. And I had another thought for Trevor as we barreled down the sunlit interstate.

It’s all so different at night, I told him. It’s upside down. I fish downstream instead of up. I cast to skinny water instead of the deep stuff. And I keep my fly above the trout rather than taking it down to them. I cast further, fish slower, find different targets and expect fewer fish. Oh . . . and I wait for the trout to pull before I set the hook.

Trevor nodded to all of that. But he questioned the last point, so I explained.

After dark is the only time I’ve ever had wild trout come back, over and over, for a fly. Big trout have slammed my hook a half-dozen times before finally gulping it in. That’s unheard of in the daylight. But it especially happens with surface patterns after dark.

When I started out, I set the hook on every hit. Bam! Strike! Set! . . . Nothing. I had nights with thirty hits and just two hooks-ups. So the logical solution was to strip-set more. Right? That didn’t work much better. The strip still took the fly away from the fish, so they had to find it again — in the dark. It wasn’t until I used a trick from my bait fishing days that I really improved my hook-up ratio. I learned to set the hook only when I felt a fish pull the line.

Trevor raised his eyebrows and glanced away from the road toward me when I told him that one. Because it goes against every fly fisher’s wisdom.

Trout recognize a fake fly and spit it out, so we set the hook fast. Everybody knows this. Sure. However, I started landing a lot more trout when I stopped setting and waited to feel the pull.

But do you know what that demands? Steely nerve. You have to push fear behind the cracked door and leave it there. You can’t be on the edge anymore. Instead, you insert a buffer — a composed curtain of calm between your fear and your fly.

But even if you can do it — hold off on strikes and remain calm out there — there’s a consequence. There’s a downside.

Trevor looked my way again, waiting for the punchline.

It takes some of the fun away. Because those jolts of adrenaline I once felt on every hit were enjoyable. They were entertaining and exciting. But now, the adrenaline is mostly gone.

“I finally have an honest understanding about what draws me into night fishing. Yes, it’s the fear. Fear is the crackling spark plug.”

Trevor told me that it all comes back to fight or flight. Our senses are heightened. We stare off toward an unseen fly with only imagination to fill in the blanks. And whatever wrecks the stillness out there is startling. WHACK! And we set the hook.

Training ourselves to wait for the pull is essentially controlling our panicked flight response. And we can put more fish in the net by restraining our fear.

But dammit, fear is fun. And sometimes I miss it. 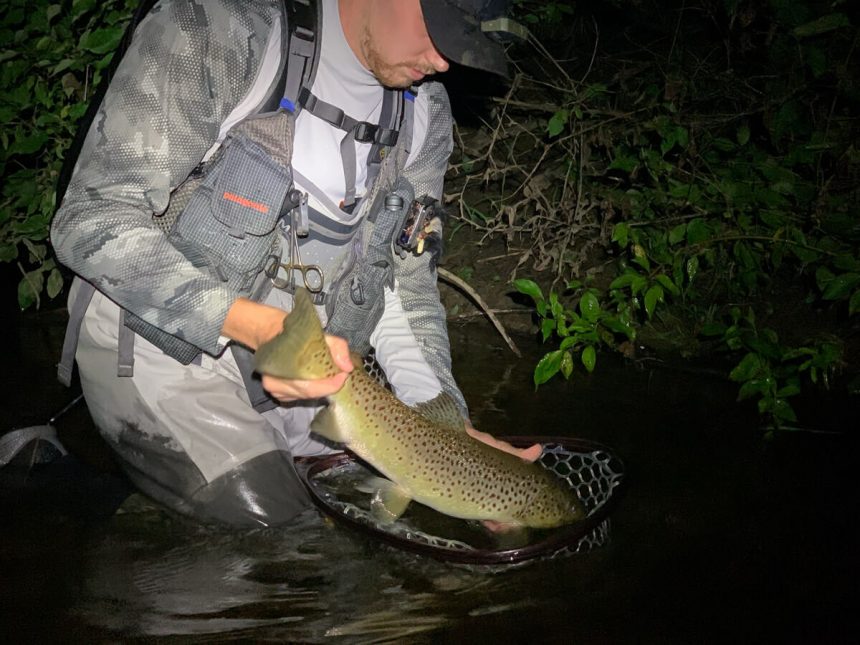 I think I’ll go fishing tonight. And I’m going alone. I’ll slide in along the edge of the cornfield. The stalks, now grown over my head, will wave in the quiet breeze, and the half moon will cast slivers of light through a cloudy sky. What lies beyond my vision? What creature senses me through the darkness?

That intrinsic fear remains. It’ll never be fully vanquished. And I’m thankful for it.

** This Troutbitten article is part of the Night Fishing for Trout series. Find the full list of articles here. ** 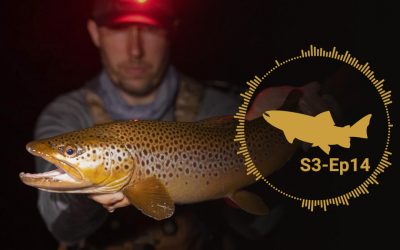 Podcast: An Introduction to Night Fishing for Trout — S3-Ep14

Ambition is the fundamental characteristic of every good night fisher. We wade into the darkness for the experience. And we quickly realize that the night game is an unwritten book, with just a few clues and an infinite room for learning new things. Each exhilarating hit and every trout in the net is a unique reward, because night fishing requires that you assemble the puzzle yourself.

In this episode, I’m joined by my friends, Trevor Smith and Josh Darling, for an overview on night fishing for trout . . . Something electric happens when we hook into the fish of the day, the fish of the season or maybe the fish of a lifetime. Our hearts beat faster. The adrenaline pumps because the stakes are raised. This is the fish we’ve been waiting for, and we don’t want to lose the opportunity. Every fisherman in the parking lot seems to have a thirty-inch fish story, don’t they?

You know what I hear when someone says a fish was “about two feet long?” I hear: “I didn’t measure the fish.”

Bass guys don’t put up with this stuff. My friend, Sawyer (a dedicated bass and musky guy), is dumbfounded by the cavalier way trout fishermen throw estimates around. In his world, if you didn’t measure it, you don’t put a number on it. They take it seriously. We trout fishermen embarrass ourselves with estimates. 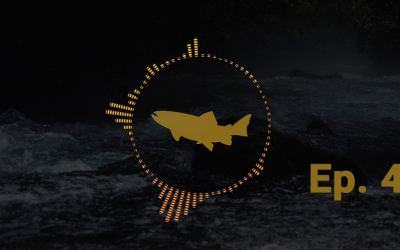 My friends join me for an honest discussion about the trout we pursue. All of us fish for every kind of trout on the list: wild trout, stocked trout, holdovers, fingerlings and club trout. And all of these trout hold value — but not equally. There are major differences in the types of trout we catch, and stocked fish are often nothing like their wild counterparts . . . 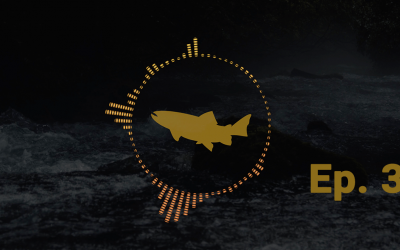 My night fishing friends, Josh and Trevor join me for a fun and detailed discussion about mouse emergers. This style is about taking the benefits of a top water pattern at night and making it a little harder for the trout to resist. Then, sometimes, we fish similar patterns that remain in the first 3-12 inches of the water column. My friends and I also trade night fishing stories about the scariest and most unusual things that happen while fly fishing after dark. 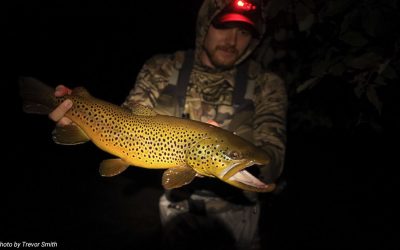 Night Fishing for Trout –The Wiggle and Hang

Lifting the rod slightly, I shake the rod tip left and right. Easy, rhythmically, I wiggle the tip and feel the line wave as I see it dance and glow in the dark. The fly shimmies and sends a pattern of waves through the surface and beyond, calling to any trout within who-knows-how-far.