Joey let go of the golden brown trout and watched it tail-kick into the shadows. With a big grin, my son handed me the net before sliding to the right and finding the submerged limestone ledge just downstream of the rock again.

For an eleven year old kid, sometimes the water that’s both wadable and close enough to where trout are feeding is limited. This morning, with trout feeding in the deepest and darkest water near large midstream boulders, our options were even more limited than usual. So now that we’d found a good thing, I knew Joey wanted to keep it going.

“Hey Dad, what’ll you give me if I hook another trout out of here?” Joey asked, as he threw an upstream setup cast.

My son turned to look at me. And I had one of those moments where I saw myself in him again — like looking in a mirror, thirty-some years ago. My boys carry a lot of my traits. I worked at night and was a daytime Dad for them until they went to kindergarten, so a lot of me is embedded in them. All the time we spent together made that deep transmission inevitable. It’s both good and bad, I suppose. And I still don’t know if I accidentally taught them to be impatient or if it’s just a kid thing.

But when Joey turned to me, still buzzing from the event of the last trout, he showed a pure enjoyment of the moment that I understood too. I felt it in him, because I felt it in myself. We’d driven the extra miles because he wanted to be here. We’d left the house at 5:30 am because I’d suggested an early morning, and he agreed. We’d parked in tall grass-gone-to-seed and cut through the woods because I’d promised him no one else would be here. Sure, the trout were fewer in number, and he knew that too. But all of it matched up with how we both love the rivers where trout live. And after a couple hours of trial and error, we’d finally dialed in a water type and a method that had the fish tuning in.

“Hey, Dad. How about this . . .  If I catch a fish on my next cast, you give me thirty dollars?” Joey deadpanned. The touch of innocence and hope that he added to it untied my natural resistance to handing out money.

I thought about the proposal for a moment. 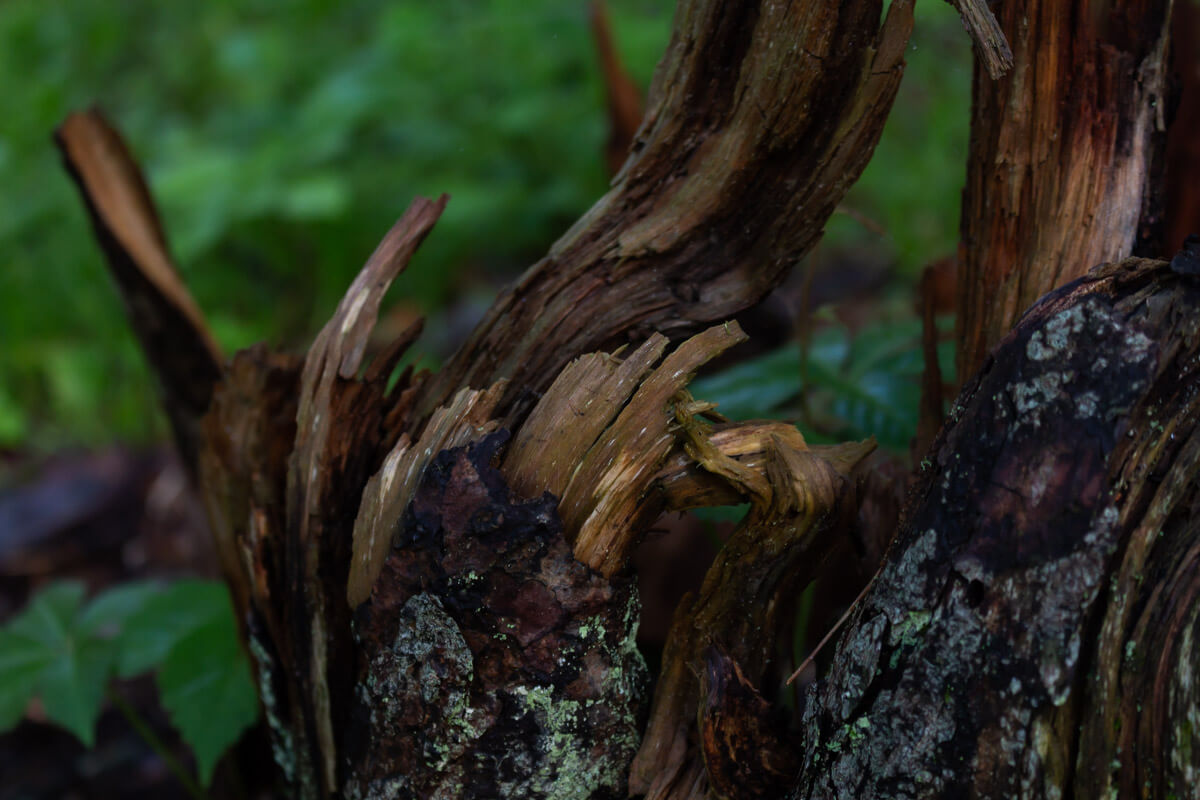 As much as my boys enjoy fishing, there’s still plenty of other things that gain their attention. My younger son, Aiden, is enthralled with his neighborhood friendships, these days. And both boys play a lot of baseball, ride bikes and hold a host of other interests besides sharing Dad’s trout fishing obsession.

So I liked what Joey was thinking. And I was intrigued by the possibilities of this incentive. What pre-teen kid isn’t looking for an extra lump sum of cash to roll in with the allowance? Just imagine how far this motivation could carry out, I thought.

“How about I give you twenty dollars if you call your shot?” I asked him.

Joey looked back at me, with curiosity. Now he was intrigued.

“Tell you what,” I said, leaning forward in my wading boots. “On each fishing trip, I’ll give you one chance to earn twenty bucks. You can pick any cast throughout the day. Call it out, and if you catch a trout on that cast, you’ll be twenty dollars richer.”

“Oh this is nice,” he said. “I’m going to save it for a really good time. You know, sometimes you can just feel when you’re in a good spot and everything is going right, and . . .”

“I know,” I interrupted. “That’s one of my favorite things about fly fishing. Sometimes you can just tell when you’re going to catch a trout.” 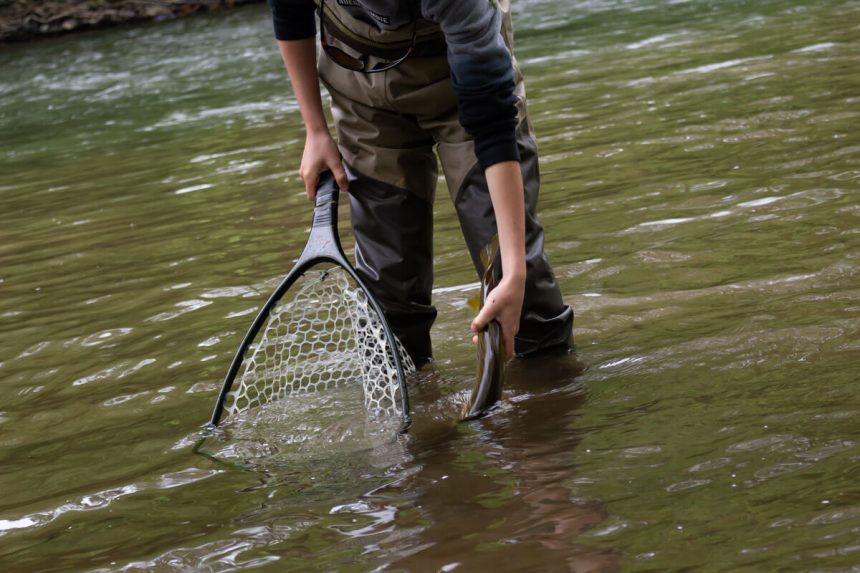 Joey knew we had less than a half hour before we needed to walk out. So he didn’t save it long. And after having already caught three brown trout in the same deep slot, he waited until he reached what we both recognized as the prime lie before he cashed in.

His casting loop unfolded and kicked the nymph over with precision. And when the fly tucked into the darkest side of the limestone chunk, Joey kept the rod tip up, holding all extra line off the water. It was a gorgeous drift. And the air thickened with anticipation.

We watched together in silence as Joey milked that drift until the very end. And I think we were both a little surprised when nothing interrupted the long, deep ride of over thirty feet.

Joey flicked his wrist and repeated the same cast to the dark side of the rock. And because the world is a wonderful place, a no-doubter clobbered the stonefly nymph.

“Oohhhhh!!” We both yelled in unison as Joey drove the hook home, and a mid-teens wild brown rolled and flashed in the dark currents below.

Joey had been one cast off. 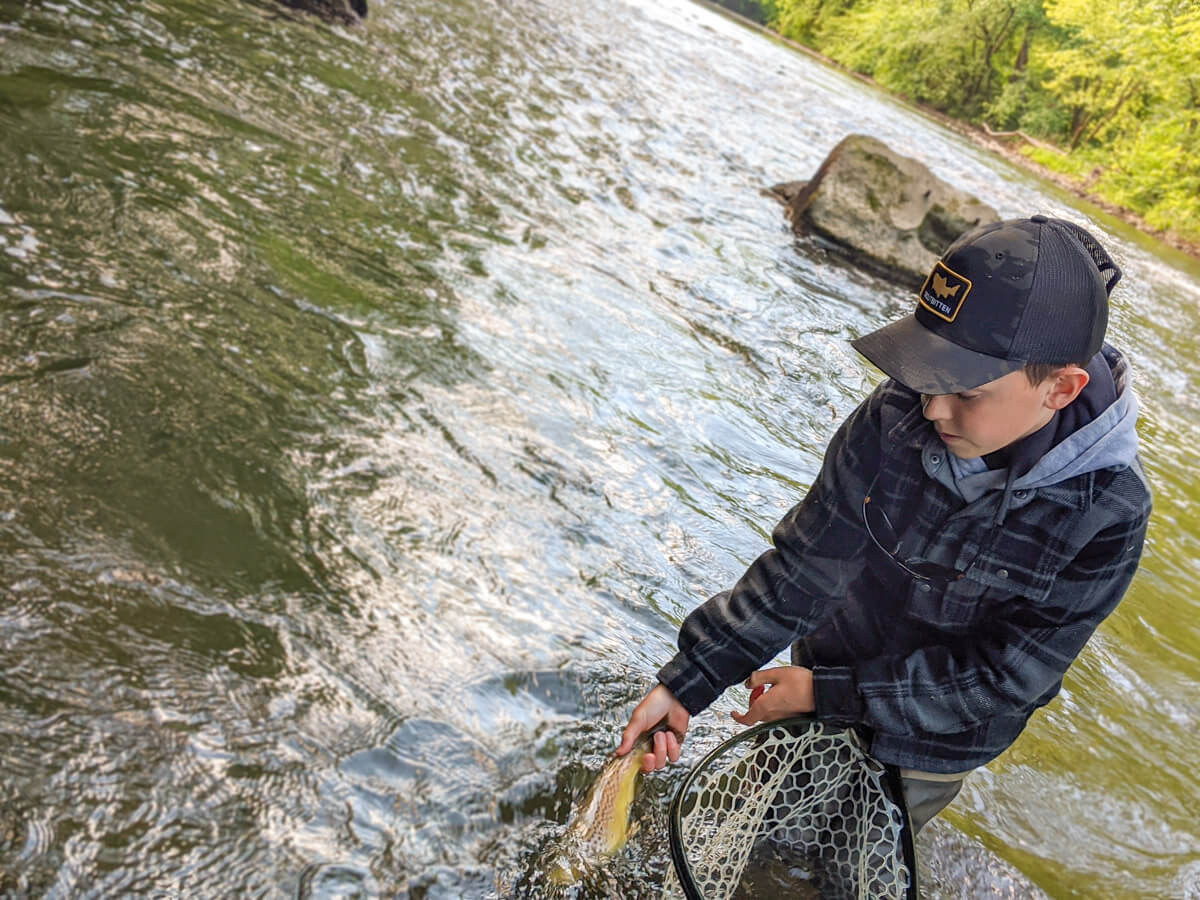 All the way home, Joey talked about the next twenty dollar cast. It was a good drive with a lot of laughs and memories.

Just wait until his brother finds out about the twenty dollar cast . . .