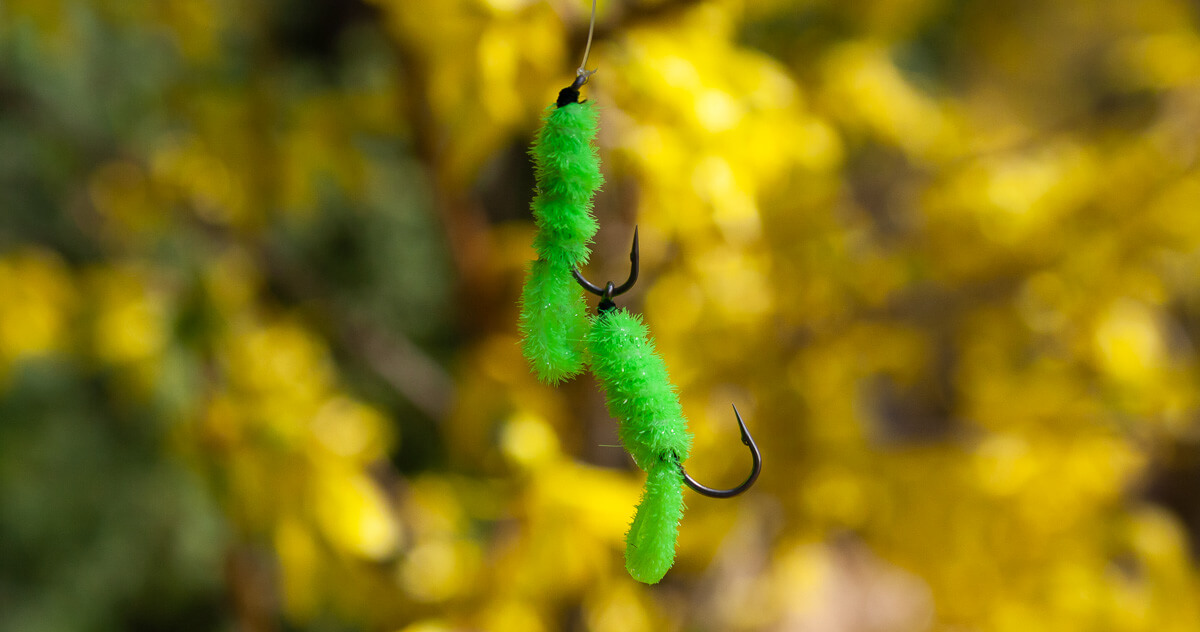 I must have been in my late teens, because I was wearing hip boots and casting a fly rod. It was a short transitional time when I fished small streams on the fly and still thought I had no need for chest waders.

It’s remarkable how the details of a fishing trip stick in an angler’s brain. We recall the slightest details about flies, locations and tippet size. We know that our big brown trout was really sixteen inches but we rounded it up to eighteen. The sun angles, the wind, the hatching bugs and the friends who share the water — all of it soaks into our storage and stays there for a lifetime. Fishing memories are sticky. And for this one, I certainly remember the fly . . .

I was learning to fish nymphs, Joe Humphreys style. I’d nearly worn out a VHS tape titled Joe Humphreys — A Casting Approach to Nymphing Tactics, and I knew his two books from cover to cover. With the newfound freedoms of a driver’s license and some generous access to the family car (a Buick Skylark), I was expanding my perimeter, pushing the radius of trout streams I could access, fishing further into the wilderness with each passing week. An ambitious kid in the outdoors, I was armed with a Delorm Atlas and a tenacious inclination for discovery.

The fly was a Green Weenie. #12, 2XL Mustad, with twelve wraps of .015” lead under the chenille. The only fly fisherman I knew at the time was the owner of a small local fly shop. Unpredictable, a little grumpy and sometimes friendly, Woody seemed engaged when I told him I wanted to start tying and fishing nymphs.

“Tie the Green Weenie,” he said. “Not only is it the easiest damn fly to wrap around a fishing hook, but in this early summer water, you’ll see it through some of the drift. That’ll help you learn.”

I nodded an okay.

Woody reached into the gridded wooden fly bin and plucked out a single chartreuse fly.

“Here’s your model,” he said with a grin. “And there’s your material.” Woody pointed to a card of matching chenille on the rack behind me.

I must have seemed unconvinced, because Woody reassured me as he walked back behind the counter. “They’ll eat it, Dom. Just fish it. Trust me.”

And the trout surely did eat it. The Green Weenie was so good that it became my first confidence fly — my go to weapon. I rigged up with a Green Weenie on the point and BHPT on the tag. Coming from a bait fisherman’s background, I didn’t see much need for a lot of options. They take what I give them, or I move on to the next trout. That was my approach.

So there I was, hip boots sturdy against the current, with the water up and off color from recent rains, on a piece of water that local anglers had given up on months ago.

“That creek’s all fished out, boy” they’d say. “Why bother?”

But it was close to my home. And I knew of a few places where leftover trout migrated once most anglers had left. This was one of them.

It was a pocket water stretch of chunky bedrock below a low head dam with the middle sawn out. The water rushed through the center opening and widened around a short boulder field. It was deep enough to hold trout in shallow times, and difficult enough to wade in hard times. That kept most anglers walking around this spot to fish the “better” water above.

So I waded to the middle, with the current near the top of my rubber hip boots, reconsidering my resistance to chest waders. And I cast.

I’d caught a handful of trout and was nearing the end of a pretty good evening, with perhaps an hour of daylight left before my forced return.

Nymphing requires deep drifts, so that’s where my flies went — down into the unknown darkness of a rocky pocket . . . until the rig snagged. I pulled up. I pulled sideways in both directions. I tried a quick stack mend on the other side and pulled again. Nope. Stuck tight. Because I wasn’t wading any deeper in those rubbers, I broke off the Green Weenie.

Now, I’ve already told you what fly would replace it — another Green Weenie. But when I unfolded my small fly box, I found a solitary green fly remaining. Out of the dozen I’d tied at my last sitting, only one survived. And with some remorse, I tied on the last Green Weenie, feeling the sting of the previous loss a little deeper.

Good fishing happens in hard to reach spots. Of course I might hang up again, I thought. But I’m casting right back to the same spot. And because fishing is fishing, I hooked the same rock just a few drifts later.

My shoulders dropped and frustration crept in. Fully expecting to break off my last fly, I pulled hard sideways until, surprisingly, the line popped free. I turned that motion into a backcast, but I felt a bit more weight at the end of the line. And as the nymph turned over ahead of me, it looked larger. I allowed the line to hit the water before I stripped in to check the fly.

What I saw was so improbable that I gasped aloud. Two Green Weenies. The hook point of the second fly had entered the eye of the first. Somehow, an impossible shot at thirty feet had found the impossible target. I held the tippet in front of me, and the first fly dangled from the bend of the other. The second Green Weenie had made a recovery.

** After a few seasons on the water, we all have tales like this. What’s your one-in-a-million story? Please share it in the comments section below. Cheers. — Dom ** 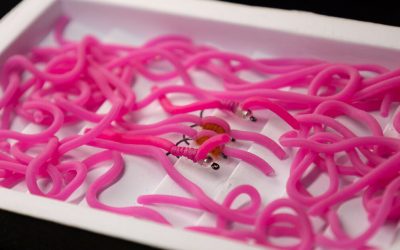 Super Fly — The Story of a Squirmy Wormy

Occasionally (rarely) something comes along that makes trout go a little crazy. Why? Who the hell knows. But it trips some trigger in trout that makes them move further and eat more than they do for just about anything else. In my life there’ve been only four of these super flies.

In dark bars and seedy internet gatherings, I keep my ear to the ground for rumors of the next super fly. Because those who find one can’t keep a secret for long. And I want to be in on the next fly from the ground up again. I want long months of virgin trout that lust for something original yet familiar, the right mix of bold but non-threatening, curiously edible and irresistible. I want to fish another super fly . . . 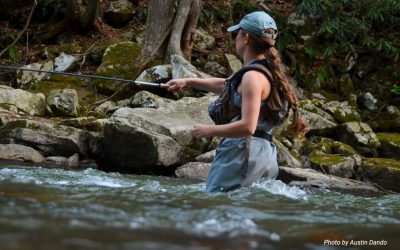 Some of it winds and bends in line with the tall grasses in the breeze. This is meandering meadow water that glistens and swoons against the low angles of a fading sun. Trout thrive here, protected in the deep cool water, among shade lines that are artfully formed by long weeds that wag and flutter in the current. You could swear the tips of those weeds are trout tails — until they’re not. Maybe some are.

Calm river waters are a church sanctuary, requiring a measure of reverent respect — even if you don’t much believe what’s in there. 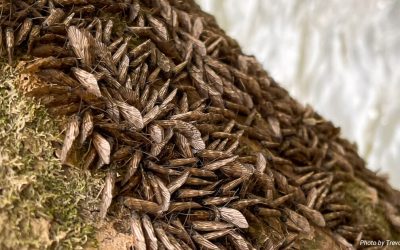 Some of these caddis were swamped by the current or damaged by their acrobatic and reckless tumbling. And the broken ones didn’t last long. Large slurps from underneath signaled the feeding of the biggest trout, keying in on the opportunity for an easy meal.

Smith and I shared a smile at the sheer number of good chances. Trout often ignore caddis, because the emerging insects spend very little time on the surface, and trout don’t like to chase too often. But with a blanket hatch like this, the odds stack up, and trout were taking notice . . .

By contrast, let’s call it attractive if the fly deviates from the expected norm. Like any other animal in the wild, trout know their environment. They understand what the aquatic insects and the baitfish around them are capable of. They know the habits of mayflies and midges, of caddis, stones, black nosed dace and sculpins. And just as an eagle realizes that a woodland rabbit will never fly, a trout knows that a sculpin cannot hover near the top of the water column with its nose into heavy current . . . 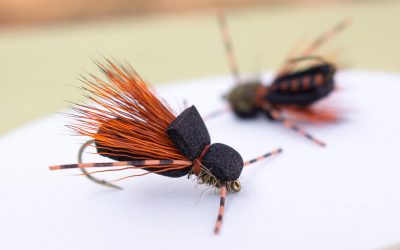 Just as the Cicada settled again, with its deer hair wing coming to rest and its rubber legs still quivering, the pool boss came to finish what he started. His big head engulfed the fly, and my patience finally released into a sharp hookset on 3X. The stout hook buried itself against the weight of a big trout . . . 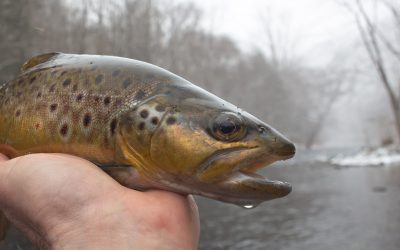