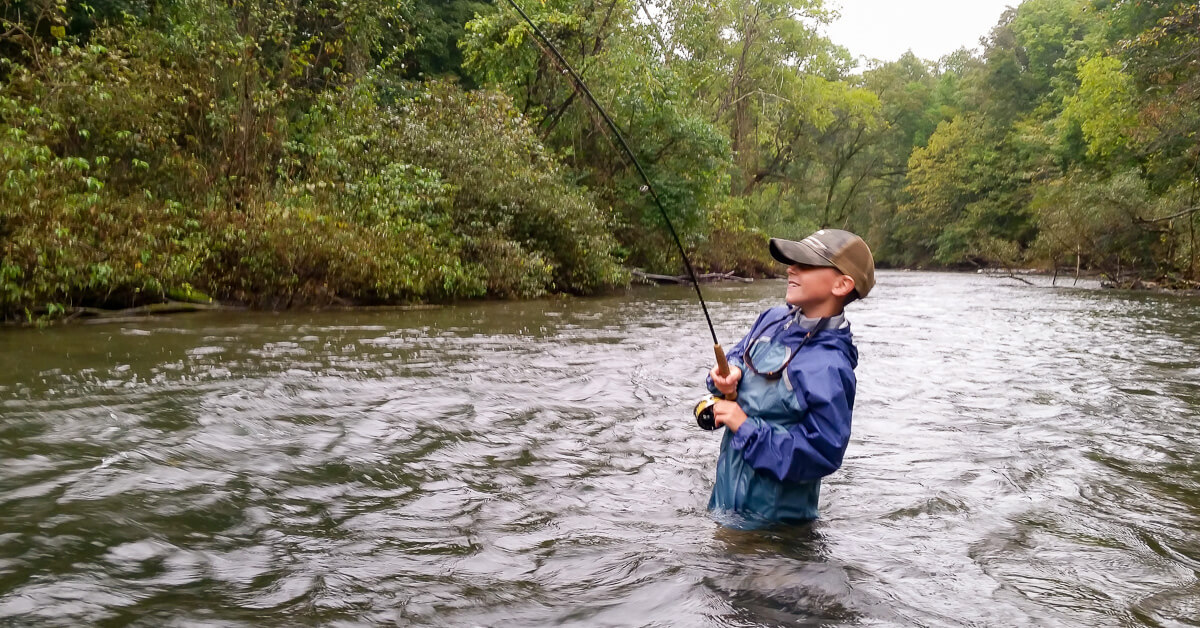 I’m halfway through another Hemingway novel. And my interest is waning. I’m in a valley of boredom, where the novelty of the narrative has worn off. I feel the weight of unread pages in my right hand, and I start to question my determination.

You might tell me that all Hemingway is interesting and full of spark, but I’ll challenge you on that. No matter the author, somewhere deep within six-hundred pages of words there’s a weak spot. And I find it at 11:30 pm, sitting in a living room under the light of a single lamp, joined by a football game in overtime. The players scramble silently inside the muted television to my left.

My eyes close. I lose track of the down and distance. When they open, I’ve lost my place in the paragraph and forgotten the weave of the storyline.

Joey steps into the shadowed hallway and rubs his sleepy face. My ten-year-old son walks to my chair and leans in to me.

Joey has fished with me since he was a baby.

Here’s some advice: Ignore the baby registry that your expectant loved ones send to you. Instead, get them a Kelty Kid Carrier. (It’s an internal frame backpack to put your child in.) It doesn’t really matter if the new parents like hiking or fishing. Buy it for them anyway. Parents need two hands, and I wore that Kelty carrier everywhere. It’s arguably the best gift we received at the baby shower, because of this: it gave me a way to bring my boys to the places I love most. 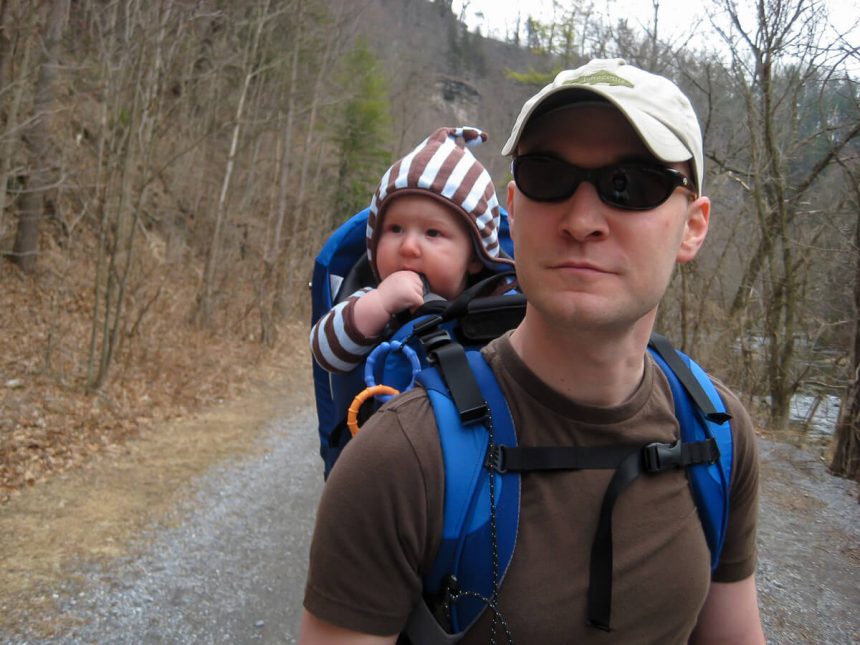 I was younger then. 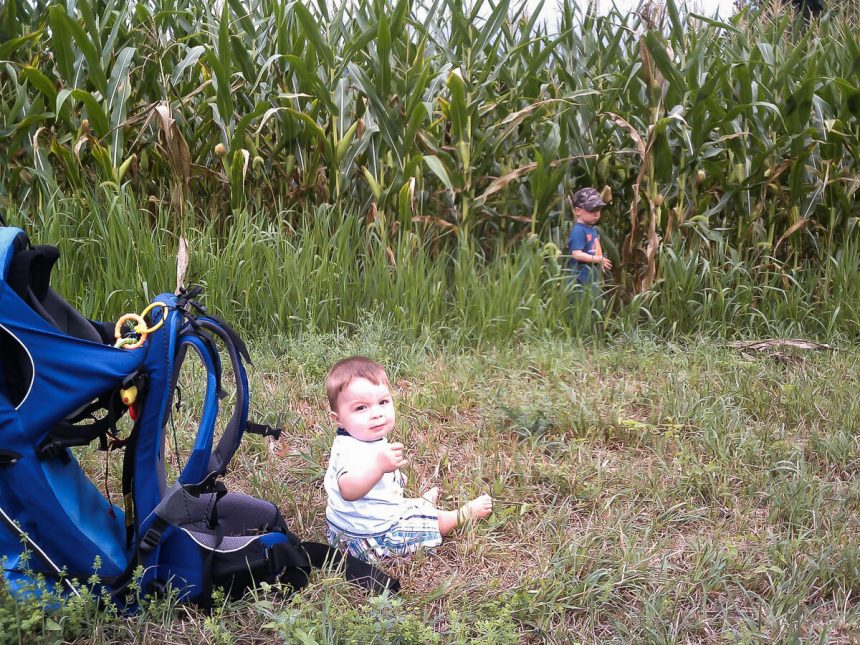 This is when my sons learned to love fishing. It happened before they could walk. It’s the draw of the water. The cool air that blows off the river and flutters over the trees. The swallows that dip and dive over the river and pick off Slate Drake mayflies. The inherent peace of a streamside walk. The silence of all things beyond the stream, making way for some freedom of thought among the evening hemlocks or the dew-dripping ferns at dawn.

Yes. My boys learned to love what surrounds the fish (the water, the air, the earth and the trees) and now they crave it. Without those streamside hikes in the blue backpack, I don’t know if, all these years later, Joey would whisper that question into my tired ear: “Dad, can we go fishing?” 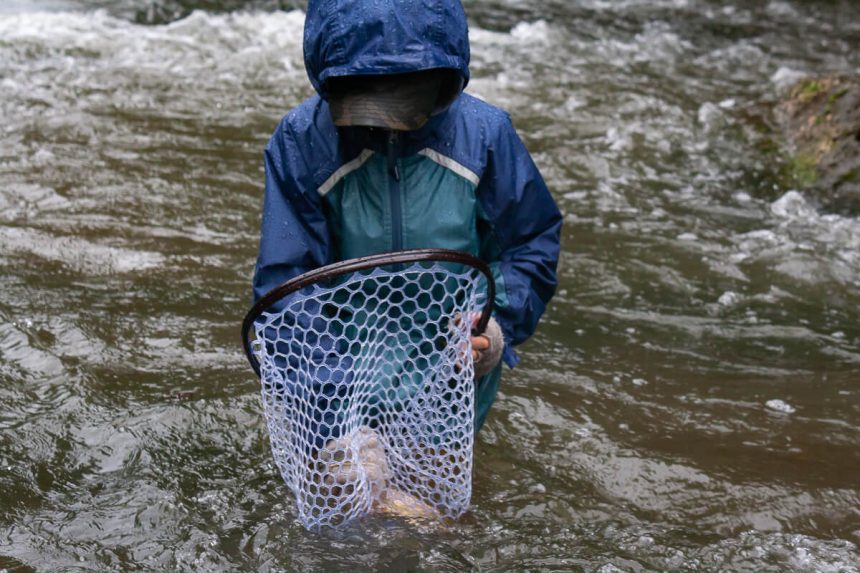 Ten years, now. And my sons have gone through phases.

Has it been enough? I hope so. These early years are my opportunity. I can give them a chance to connect to what’s out there, away from carpeted floors and blinking screens — to provide for them a base relationship with the outdoors.

Will they be fly fishermen at fifty? Will they take on fishing as a way of life? Will they need it as something to help them through difficult times? I don’t know. But I’m giving them that chance.

I’ve tried to keep a balance, too. While Joey is currently asking me at every turn to take the next fishing trip together, my younger son, Aiden, cares most about playing outside with his neighborhood friends right now.

Joey asks me every day. I say yes when I can. I ask Aiden every couple days, and lately he says no. But if he declines long enough, I’ll make some decisions for him.

Yesterday, Joey ran off the bus through the rain to ask if we could fish. I broke his heart a little when I said the river was in flood stage. So I took both boys on an adventure, visiting all our favorite spots to see the power and force of big water. Aiden lit up when he spotted a massive oak, uprooted and carried midstream in the wash. 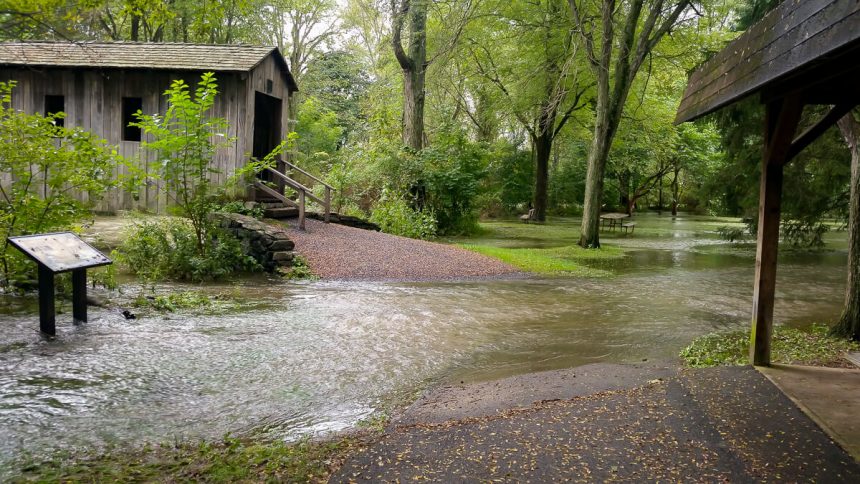 Home stream, way over the banks and spilling into the park.

Neither of the boys fished much this year during the spring baseball season, either. And while their absence from the river presses on me, that feeling motivates me to keep the river in our lives no matter what happens.

Joey waded through a knee-deep riffle, toward a bank side boulder that he’d never reached before. We’d fished for two hours with the fish count as zero as the skies unloaded a hard rain into the river. I waited underneath the half-shelter of a large sycamore and watched my son from twenty feet away. Wet and undeterred, Joey swung the rod forward and pushed the tip toward his target. The line and the nymph followed on course. After tens of thousands of casts over the years, his motion was an instinct, and he finally could think of something else.

Where is the trout? He asked himself. Inside the seam, or in front of the boulder?

Joey chose a cast that landed in the whitewater. The fly sank with the accelerated current, and Joey tightened the slack with a raised rod tip that tracked downstream just a few inches.

He struck at nothing. No signal. No indication. Just faith, and an instinct that his trout was there.

The hook stuck solid, and Joey went into fish-fighting mode. He reeled too much and held the rod too high. But we’ll work on it.

“How’d you know to set the hook?” I asked him as I netted the trout.

“I was born to fish big, Dad!” Joey yelled with a fist pump in the air.

I don’t know what that means, but I laughed hard when he said it.

After the release we stood there together in the pouring rain, watching the river rise. 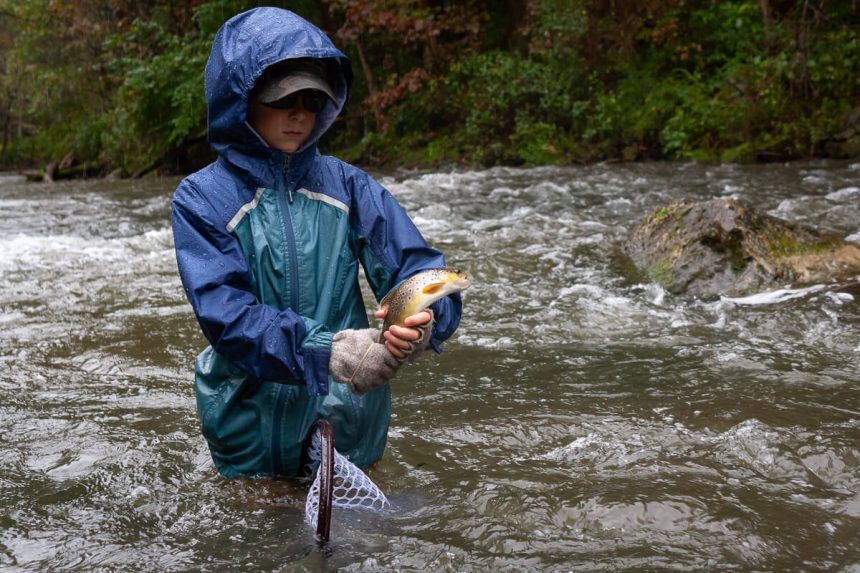 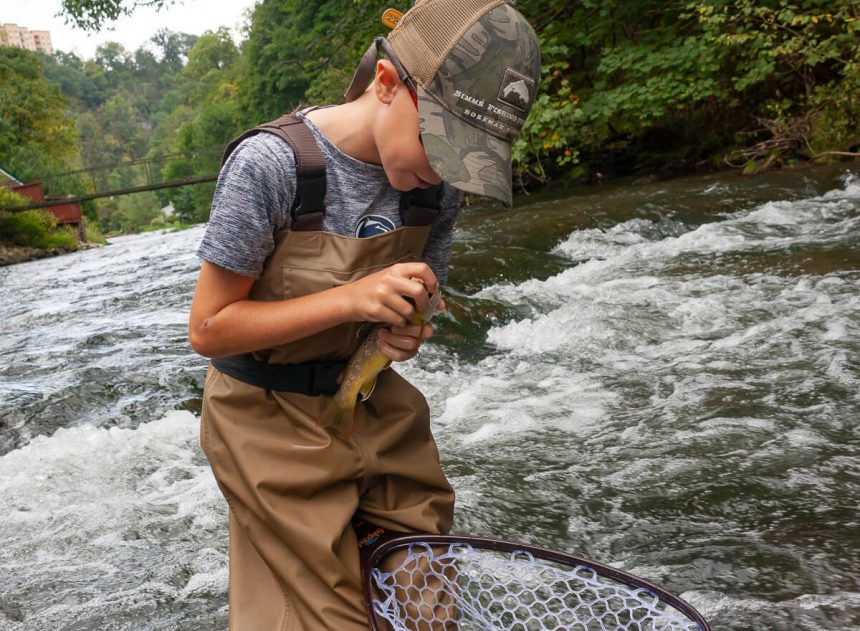