You’re In Too Far Now

That large tail waved goodbye, and a sturdy wild brown trout slid back into the flow. It was a good fish for this river, and I texted a couple pictures to Burke — just to remind him that I was fishing and he wasn’t. This is what we do to each other.

I must’ve been a little too gleeful and gloating — chuckled with a little too much gusto when I hit send. Maybe . . . because on the next cast, instant karma sent my leader and flies into the sycamores. And so began the twenty minutes of foolishness that followed.

I looked up through leafless limbs. They refused to block the direct sunlight. Straight into my eyes, no matter the angle I took. The sun was there, blinding me as I looked up to find the flies.

I tugged on the line until one of the branches cracked but then recoiled, leaving a more complicated mess of monofilament and my two flies still buried somewhere in the tree. I pulled again, and one of the flies dangled a half-foot below the thieving branch. My hand-tied fly reached for the river and teased me, still well beyond access but now visible.

Just break it off, I thought. Really, it’s the only thing that makes any sense. Break it off and move on.

It’s hard to let go, isn’t it? My line and my flies lay woven through multiple branches, suspended over a deep section of fast water, and there wasn’t any real hope of getting the rig back. But just before busting it off, I was granted a spark of optimism. A mid-stream rock the size of a five gallon bucket lay just under the greedy branch. It was an invitation to save my leader and flies, so I took it.

Enthusiastically, I waded into the run and climbed aboard the rock. But the platform wasn’t as flat as I’d hoped, and with water rushing through my legs, the balancing act was more difficult. Eventually, I found my center of gravity atop the precarious perch, and I stabilized a bit (though I certainly still looked like a fool). I peered up through the scattered rays of my worn out sunglasses and pulled hard on the line. 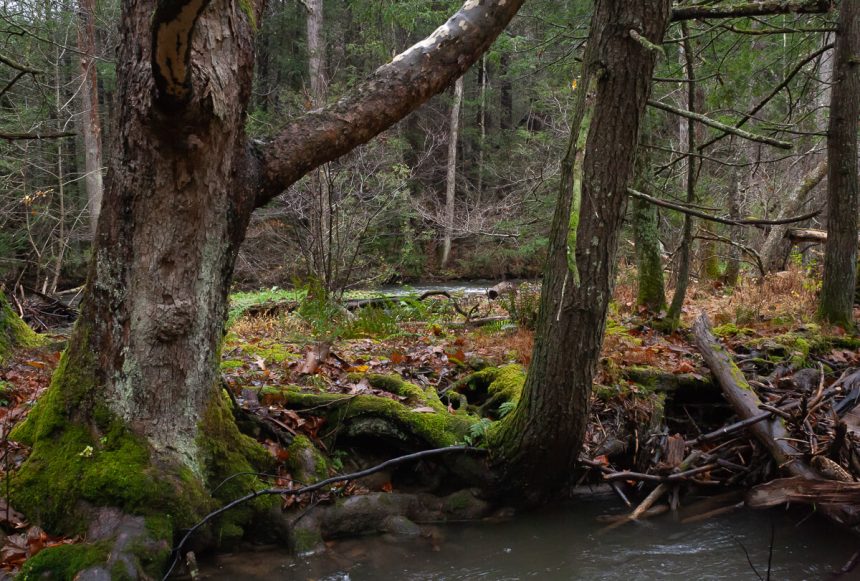 I looked around at the rushing water, up at the tree and down at my rock. I tried to scrutinize the situation from a new perspective. Was this worth it? For a moment I thought about climbing down and breaking it all off, but I couldn’t do it.

You’re in too far now, I thought. No sense giving up.

So I took it to the next level.

I turned my rod upside down and grabbed it about four feet into the butt section. Then I lifted the rod and used the reel seat to seize the limb and pull with just enough force to overcome the cantilever, yet not pull the four sections of my rod apart. This dangerous trick has worked for me a hundred times (and I’ve also broken a fly rod this way). I eased the limb down into my second hand, releasing the grip of the reel seat on the limb so I could invert the rod and tuck it under my arm again. This was going quite well now, so I boldly grabbed at the dangling flies until . . .

“And so began the twenty minutes of foolishness that followed.”

My rod slipped and the branch sprung back, using all the stored energy in the flexed limb to drive the #12 hook into the base of my finger. The 6 lb tippet snapped and disconnected. I now had an upside down fly rod in one hand, part of my leader in the other, and a Beadhead Walt’s Worm in my finger.

There’s an upside, I thought. At least I have one of my flies back.

It was the first time in a while that I’d seen a hook mounted that firmly into one of my body parts, and I didn’t like it. Not wanting to think about it too much, I flipped the rod around and stashed it under my arm, grabbed my hemostats and (still perched on the rock) quickly backed the hook out of my flesh. It went surprisingly well. (There’s another good argument for going barbless.)

I looked back to the rest of my rig, still in the timber. Defeated, I climbed down from the rock and sloshed over to the bank, pulling the line along like a kite string still attached to the branches. With one final straight-line pull, I expected to hear the rifle-shot snap of my strong monofilament butt section breaking. Instead I heard the cracking of dry branches, and I turned to watch a large section of sycamore limbs plop into the river — my attached rig floated downstream.

I was so far committed at this point that I couldn’t help myself. I ran downstream through skinny bank-water until I overtook the floating branch. Like a summer lifeguard I waded out into the flow and rescued the branch, my leader and the remaining fly were stuck somewhere within.

I found a streamside log suitable for a good ten-minute bank-sit, and I unthreaded the tangled line. No way I was clipping it off and starting over. You’re in too far now, I thought.