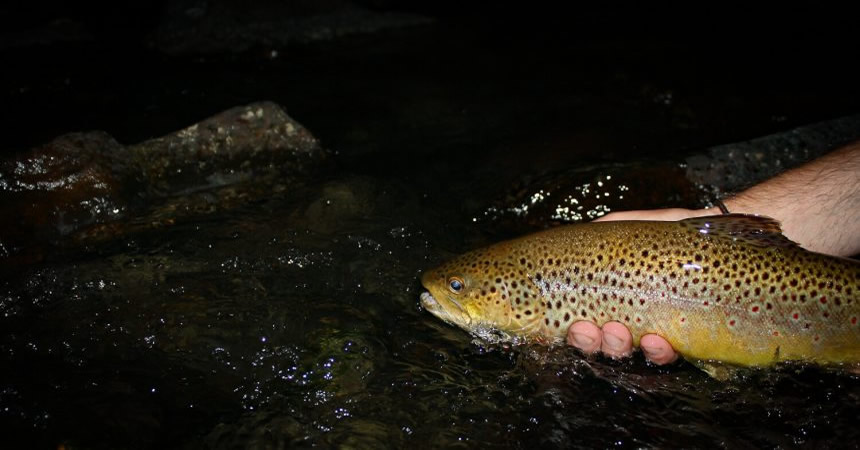 Night Shift — This River and the Other River

I think I’ve night fished often enough now to make some conclusions — not many, but a few basic determinations that allow me to have confidence in laying out a few principles.

Here’s one: night fishing around here is hard. It takes dogged persistence over many seasons to get anywhere with it. If you get thirty hits on a top-water pattern one night, go out and try it again the next night — you’ll see what I mean. The night game is so inconsistent it’ll drive you mad — and then it will draw you in.

Here’s another: night fishing is drastically different from one river to the next. The extent to which this is a fact has surprised me.

Last one: slow night fishing on a river doesn’t have to make any sense.

I stubbornly resisted these truths through many years of night fishing one favorite lonely river, in particular. It’s far more stingy than the rest. Over and over, I’ve waded the cold dark waters that produce for me in the daylight, and yet I cannot crack the code in the darkness. Sure, I do catch fish there, and I’ve caught some large ones, but over half of my 50+ night trips there have been a shutout. Maybe there is no code. That’s what it’s really coming down to. Maybe night fishing there will simply be a low reward proposition. And maybe that’s good enough. 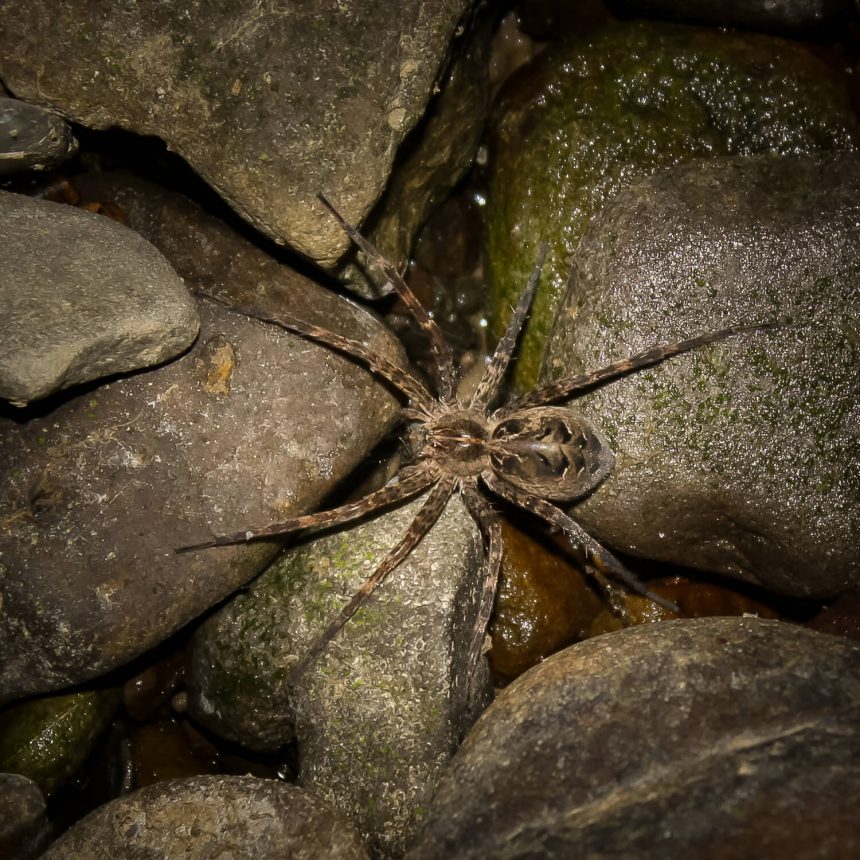 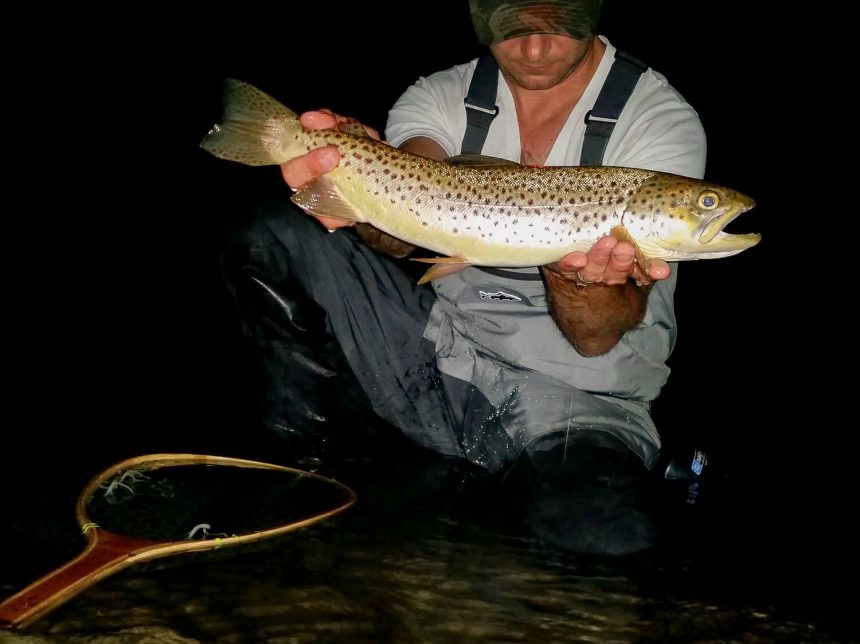 I drove down the narrow lane and turned into the parking lot so slowly that I left no dust cloud above the parched, summer dirt road. I was in no hurry.

I love that about night fishing — I don’t feel rushed. I’m not in a race against the fading daylight. Neither am I racing against the rising sun with any real-world responsibilities waiting for me in the afternoon. At night, my family is safe, asleep in their beds and satisfied, and I’m on a river. It’s only some slow fishing that finally pushes me away from the dark water and back into the lights of my headlamp along a wooded path, then the headlights of my truck on the black highway, and finally into each light that I switch on and back off while executing the bedtime routines in my home. Then I fall asleep behind the darkness of my closed eyes once again.

I geared up and biked the dirt trail upstream a mile or so. Biking in the dark seems dangerous, and I should probably get a brighter headlamp for it. I just use the same one I do for tying knots streamside, which is purposely under-powered.

On this night the fishing never really slowed down. Action was good (for night fishing) the entire time, and I’ve come to expect it on this river, under the right conditions. There was no companion moon — only a starry night to keep me company.

I fished from 10:30 pm to 1:45 am, and I had interest from about twenty different fish. Half of them were bumps and slashes from trout that wouldn’t actually commit to eating the fly, but it’s still good to have the fish respond — it helps to locate trout and dial in a pattern and a water depth. I only landed five of the other ten that were hooked. Some of those fish came unbuttoned because that’s fishing and it happens. But I lost a couple of them because I was too aggressive during  quick fights — it’s an easy mistake to make. Heavy tippet, surface takes and too much adrenaline add up to flopping fish and slack line. Barbless hooks slip out easily when line tension is lost, and fish hooked at night often fight erratically in the first place.

It was a good night. A few of the trout caught were in the upper teens. For wild trout, in this region, that’s something to be happy about. And the solitude recharged me. 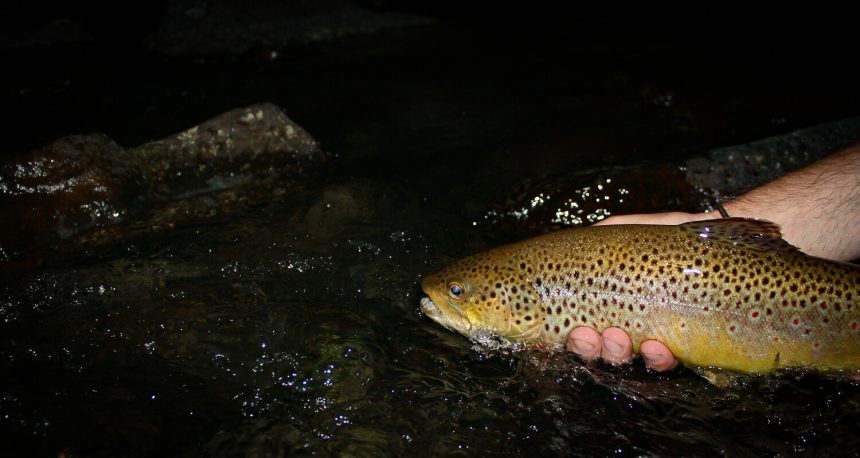 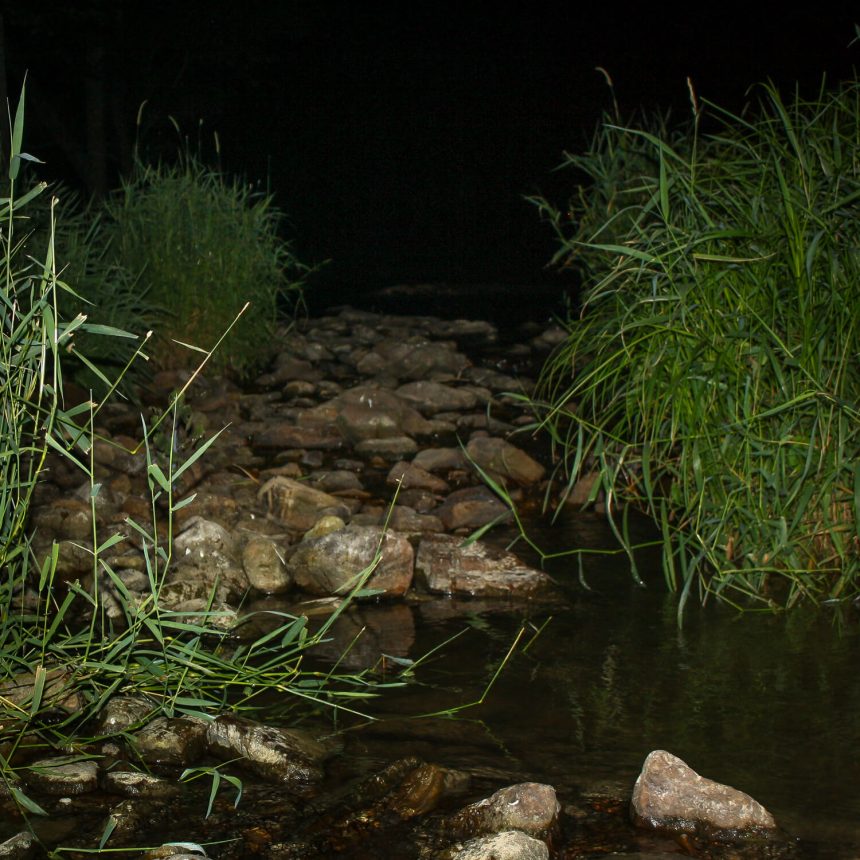 I’m back into a night fishing phase. I’ve mixed in night trips all year long, but sometimes the pull of the darkness is so strong that it’s the only way I want to fish, and I plan my days around the nights.

I walked down the ravine into one of my favorite stretches of trout water. I know it well enough that the daily and weekly changes a river goes through feels, here, almost as if I’m watching one of my sons grow and mature. I feel close and connected with this spot.

I started in the far channel of the island. It was hard to make myself pass up the soft water at the top of the near channel, but I did. Just a few nights earlier, I spent over an hour in that small stretch of water, and I needed to hit the far side tonight before the moon lit it up.

The moonlight was unexpected. Hidden behind a steep mountain of spruce, the moon was not a factor the previous night, but there it was — a half moon directly upstream, staring trout in the face.

The far channel was still dark an hour later when I reached the bottom. I clipped off the flies that I was swinging, replaced them with a new pair of wet flies and turned to face the current, then I drifted the flies back up the same skinny channel of water.

Probably an hour passed, and the moon shifted so that the shade lines were more prominent on the other side. Clouds then moved in and covered the white moonlight. I walked through the brush to the bottom tip of the island, reattached the swinging flies, and fished the near bank.

On my way through one-hundred yards of perfect bank water, I picked up two fish and had bumps from two more.

Honestly, that’s good action for this river at night. It’s hard for me to make peace with that fact, but I’m starting to. I think the night fishing should be better here, but … it isn’t. 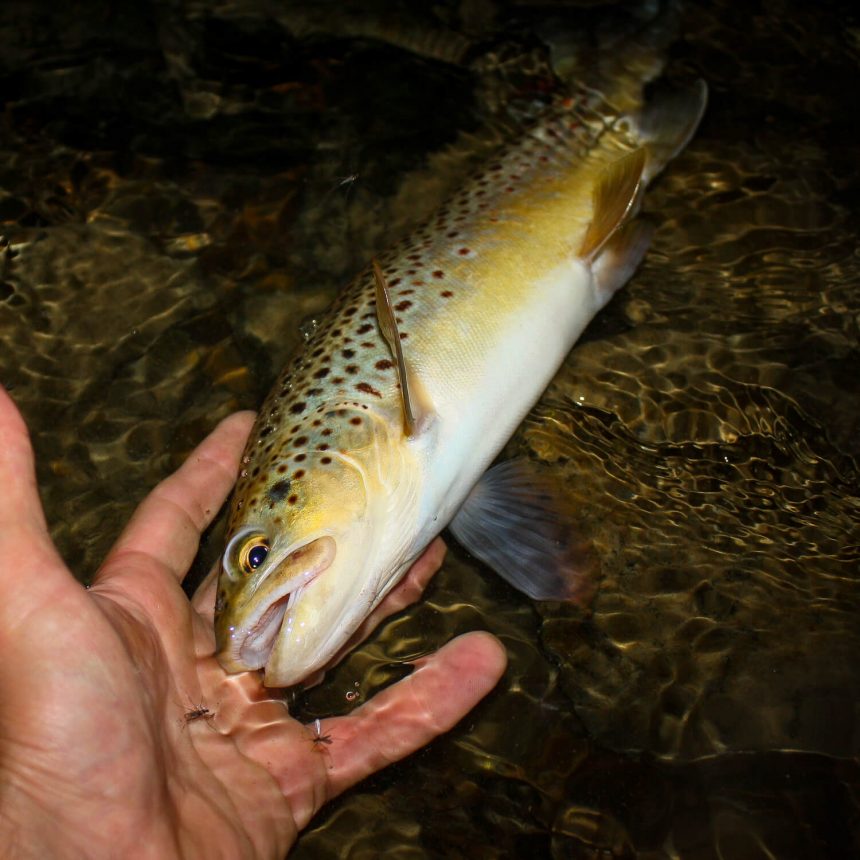 I’ve come to a point where I’m out there at night to enjoy everything about it. I’ve accepted that night fishing around here isn’t like the storybooks. But there’s always enough success to foster hope.

For a while it was the hope that kept me night fishing — the belief in a chance that some night I would catch the kind of wild brown trout that never shows itself in the daylight. That’s what kept me going. As seasons pass, and it doesn’t happen, that belief dims with the reality of every trip.

I’m OK with that reality, and I still have the belief anyway. Now I just night fish because it’s in me, and I simply love it for what it is. 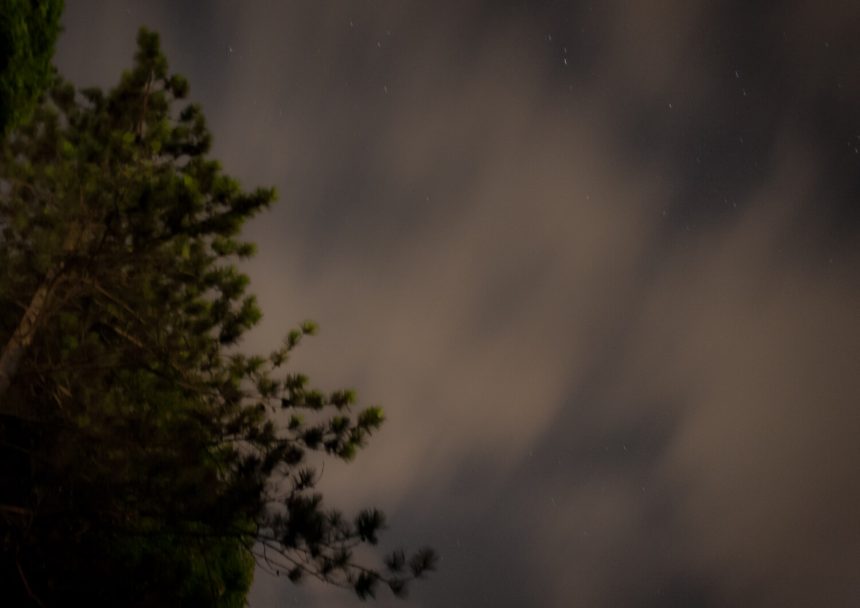