I burn through boot soles fast. And cheap boots with poor foot support are a bad idea when you’re wading heavy runs and putting full days on the water with lots of hiking, so I was spending about $150 every ten months on a new pair of boots.

I used to resole my own felts, but they never held on for long. I then moved to rubber soles when they became popular, in large part because they’re better in the winter (no snow stilts while walking the banks), and if studs are used with the right rubber, they can be just as good as felts with studs — almost. My early attempts to resole my own rubber soles with Aquastealth were expensive failures, and to get it done right by a cobbler you’re looking at $55-$80 (that’s only if you can find a cobbler who carries one of the sticky rubber soles).

My point is, all of that sucked. I was fed up with scrapping boots with worn soles and solid uppers with a lot of life left. I was fed up with buying and replacing new studs every few months, and I was fed up with poor traction.  The answer? BAR BOOTS, BABY!  I’ve been wearing bars for many years now, and they’re a perfect solution to those problems. The bars protect the boot soles because — well — you aren’t walking on the soles. The bars take all the wear, and the traction is excellent.

Patagonia’s new Foot Tractor bar boots. These are NOT the right bars for a DIY solution. You need the straight bars.

When I first saw the Patagonia bar boots I wanted them, but I already had three good pairs of Simms Freestones with worn soles sitting in the garage, so I decided to tackle the project myself. That was many years ago, and I’ve replaced the bars a bunch of times now.

I’ve learned that cheaper boots with a soft midsole don’t hold the inserts very well, and the bars can work loose. However, most good wading boots are built like a hiking boot, with a firm midsole and solid support. You can tell the difference by simply flexing the boot.

Let me be very clear — if you don’t like to drill things, use screwdrivers, pliers, screw extractors and hammers, then just buy the Patagonia bar boots. But if you’re good with those tools and don’t mind putting out some effort, then buy the Patagonia Aluminum Bars replacement kit, and you can put bars on your own boots. If you like using hacksaws, drill presses and grinders, then buy some flat aluminum bar stock and make your own bars. I’ve made my own bars twice, and it’s a lot of work to save a little money. More recently, my uncle fabricated a bunch of bars for me, and I’ve been using those — thanks, buddy!

Let’s get to it. The replacement kit contains a set of pre-drilled replacement bars, screws and insert nuts.

I first went to a local cobbler and asked him to put on the flattest stiff rubber sole he had. After explaining what I was going to do, and showing him a few pictures, he resoled my boots while I watched for $30.  Good deal, Nice guy, and the rubber that he chose has held up very well (but again, the rubber really takes no wear).

Resoling the boots was unnecessary. I have since mounted the bars right on top of Vibram Streamtred soles and it works well.  The sole doesn’t have to be flat — the bars will hold if the midsole is firm.

On the first pair, I used the bars from the replacement kit. (I later used those as a template to fabricate more bars.) I drilled holes in the boot soles to line up with the bars, being careful to drill only deep enough for the insert nuts, and I used a slightly undersized drill bit.

Then I screwed in the insert nuts with a #5 Allen wrench.

My assistant diligently worked on his own wading boots.

Once the insert nuts are in place, it’s just a matter of laying the bars down and screwing them in. The instructions in the replacement kit mention the option of tipping the bottom of the screw with Loctite adhesive, but I haven’t found that necessary. In fact, it makes them harder to remove. Oh, the removal …

If you lead a happy life and fish a lot, then you’ll wear down these bars much quicker than you’d like. That’s the one thing nobody seems to mention — they wear pretty fast. It makes sense, because the harder rocks are constantly grabbing the softer aluminum and scratching/chipping away at the bars. They become rounded over time, and I usually replace them when they start to look like this: 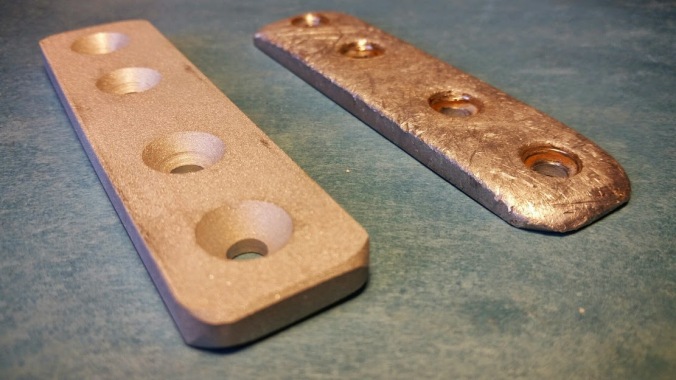 Again, a warning that the process of replacing your bars isn’t exactly easy. It would be if you could just unscrew the old bars and replace them with the new ones, but in my experience, the screw heads are often worn enough that you can’t get a screwdriver to bite in, and you’ll have to use a screw extractor. I’ve had the best success with a #2 Grabbit Screw Extractor.

Quick tip: sometimes while removing the last screw the bar will start to turn, and the insert will back out with the bar. To avoid this, I just slide a drill bit or similar through the bar and into the insert on the opposite side, preventing it from turning. 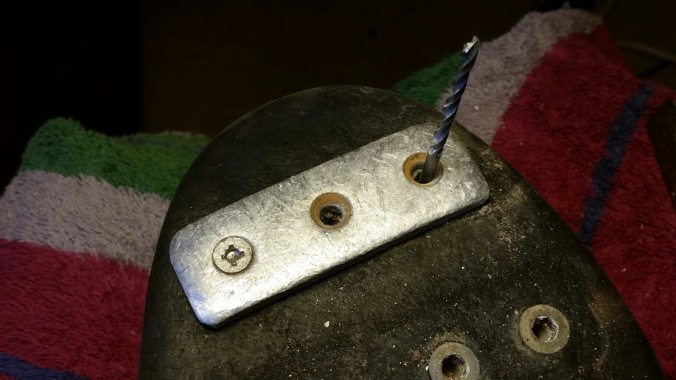 If you are going to try to fabricate your own bars it will help to know that the aluminum is 1/4″ by  1″, and the screws that fit the insert nuts provided in the kit are:

Good luck! The bars are a little extra work, but they are a game-changer. Let me know how it works out for you.

The Patagonia Bar Boot replacement kit for the original straight bars is getting hard to find (although the link to Patagonia still works and they do have them in stock). You should understand that the Foot Tractor replacement kit (with the zig-zag bars) will not work as a DIY solution because the kit does not contain the insert nuts.

It took a while, but I tracked down the insert nut. So if you want to make your own straight bars and mount them, use these.

The Troutbitten video series, Streamers on the Mono Rig continues with Episode Two, covering the unique possibilities and the demands of casting.

Fishing streamers on the Mono Rig offers anglers ultimate control over the direction and action of their flies — all the way through the drift. And while small streamers may need nothing more than a nymphing-style cast, mid-sized and full-sized streamers require a few changes in casting to get the most from the technique . . .

Streamer Presentations — The Touch and Go

Want to get deep? Want to be sure the fly is low enough? Try the Touch and Go.

Sometimes, I don’t drift or strip the streamer all the way through. Instead, I plot a course for the fly, looking through the water while reading the river’s structure. And I look for an appropriate landing zone for the Touch and Go . . .

In short, turnover gives us freedom to choose what happens with the line that’s tethered to the fly. How does the tippet and leader land? With contact or with slack? And where does it land? In the seam and partnered with the fly, or in an adjacent current? By having mastery of turnover, we dictate the positioning of not just the fly, but the leader itself. And nothing could be more important . . .

Classic upstream nymphing feels a lot like fishing dry flies. The challenge of making precision casts is there; it can be employed at extra distance if necessary, and it’s most often performed with tight loops and light flies than don’t change the cast.

While pure tight line nymphing is performed with no line on the water, classic upstream nymphing does the opposite.

Then there’s the induced take and floating the sighter . . .

The Case for Shorter Casts

Find water you can fish close up, and work on deadly accurate casting. You’ll find that, when fishing shorter, you can fish harder. Instead of hoping a trout eats or wishing for a strike, the kind of precision possible at short range lets you make something happen with intention . . .