I have two young boys and I often pick my fishing times around naps and other activities.  These quickies are not the most satisfying fishing trips where you can take your time one on the water.  You really don’t have the luxury to cycle through flies or change out rigs because the constant manipulation ultimately results in less fishing time.  Having said that, I’ll take a short trip any time I can because fishing is always better than not fishing.

Today my wife was taking the kids to a friend’s birthday. I had a few hours before they returned so I grabbed my gear and raced off to a local limestoner.  I’m used to fire drills like this and I keep 2 or 3 rods rigged up at all times that I can grab and go when the opportunity arises. I was optimistic about the section I chose.  I had pulled out a couple solid high teens fish there last spring.  Even in low flows there is still a great deal of prime pocket water for long leader nymphing. The big issue today was the wind though.  I spent a little too much time early on trying to make a nymph rig work.  Tracking a sighter in the gusty wind was damn near impossible.

The skies were dark and it was spitting a bit.  I decided to fish streamers despite the low water. I hooked into a heavy 17 inch bow almost immediately. After that fish, I continued picking my way through the pocket water and casting to all of the most likely holding lies.   The water is around 2 feet deep in the heaviest water near the top of the run. I had a hell of a chase in there. I was fishing a headbanger sculpin and half way through my retrieve a beastly brown gave chase. The most vivid memory that sticks with me about this fish is how red he was. He no doubt would have been a beautiful fish. He chased hard but the fly was past him and working it’s way downstream. I continued retrieving cross current and ran out of stripping room. The fly dropped to the bottom and he turned away. He was now laying directly across from me in plain sight.  It was a good low 20s fish. I gave one more futile cast and he spooked and swam away.

I continued working up in the fast water to where there is a fallen tree across the river. This spot creates a nice cushion on the upstream side of the sweeper.   I dropper my streamer right along the bank and took two quick strips as it approached the tree.  A decent brown darted out and puked all over my streamer but never found the hook.

My time was running low so I picked up and moved to one last good moving water section. Right against the bank there are numerous pot holes adjacent to an overhanging tree.  I cast directly above the first one and timed my first strip just as my flies reached the lip of the depression.  There was a tremendous gold flash and I was into a solid fish! 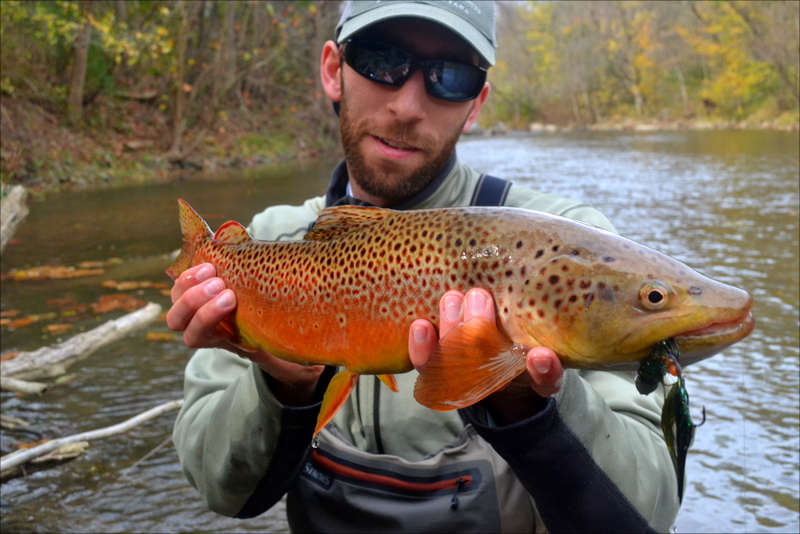 There really is something special about big wild brown trout in their fall colors.  Another view