Everything was too loud this week. Sometimes it feels like I wasn’t built to be around people, and the simple interactions with others, even with my own family, stack and pile on top of me. My jumbled thoughts and endless worry needed to go away for a while, and I’ve learned that a long day of fishing in the right place can reset that too-many-people-and-too-many-thoughts gauge back to a baseline. The right river has done this for me countless times, and yesterday the perpetually flowing waters renewed me once again.

I arrived just after dawn. And I was alone.

Two cars in the lot, but both were from cyclists. The stickers on their vehicles read: Cannondale, Trek, and “Share the Road.” Good. Not the fishy type. So I walked down through wet morning brush and fished the lower island. I returned to the truck at noon to refill my water bottle, and even the cyclists were gone from the midday haze and heat. There’s nothing like knowing you’re the only one on the water in a place like this, and I had unlimited hours ahead.

Half a day later, I would return at dark through a violent and brilliant thunderstorm, drenched again from the heavy rain and wind, still alone and still wonderful. Through all the years, I cannot recall another day when I had this water to myself. I have intense memories of full days, fishing the upper section in the winter, my boot tracks and the border collie’s paw prints, marking our solitary partnership in the new fallen snow. But never have I had such privacy on the lower half of my favorite river. 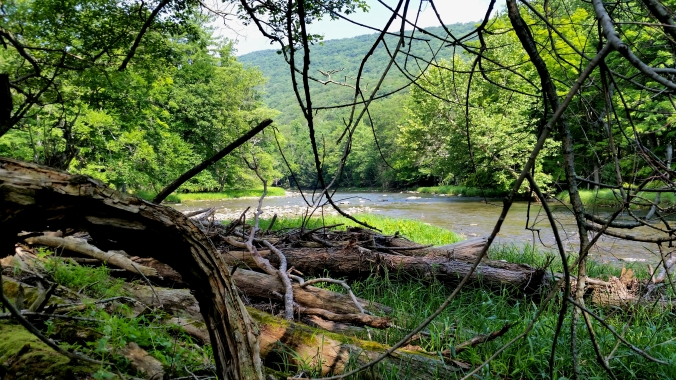 I worked all the islands. The fishing was mostly slow, but I didn’t care. I enjoyed working hard for the fish I did catch and was willing to accept the price for such time alone: high heat, hot sun and low water. No matter. Wet wading kept me cool as I changed dry fly and nymphing rigs, trying to dial something in.

Early on, I approached a favorite spot, where during the cicadas craziness six years ago, I lost the largest fish I’ve ever hooked on this river. When I didn’t move a trout with the go-to patterns, I held my ground, because on this day I had unlimited time and patience. So I tied on a Soft Hackle Wooly with a heavy load of shot in front. It sank quickly into the head of the run, and I short stripped once ….. WHAM. I was hooked up with a large brown for about a minute until it popped off. Three casts later, and the same thing — another big brown hooked and played with another long distance release. By myself, with unlimited river upstream and down, I shrugged and moved on.

At the bottom of the next island I landed a sizable stinky bass, and I thought of Sawyer. Ugly thing made my net slimy.

I don’t hate bass. I just like messing with Steve Sawyer.

Five large browns jumped off my line yesterday. It’s the way things go sometimes, and that’s OK.  I had the camera, and maybe I was playing the fish differently, wanting too much to get them in the net and set up a good picture. My usual strategy is to put the screws to big fish, using hard and constant side pressure while never giving them a rest. Maybe I was to cautious.

By late afternoon things turned on. I’m not sure if it was pattern, water type or the fish just started eating. But like most things in fishing, I figure the answer is somewhere in the mess of all that. I discovered that feeding fish were not in the deep holes. They were found in swift water above those holes, and the best fish were in fast runs about a foot deep — standard summer stuff, really. They also wanted the shade, they really wanted the Green Weenie, and they seemed to want it with no other flies on the rig. Fair enough. Once I found the combination of water type and pattern, I had a few hours of constant action. 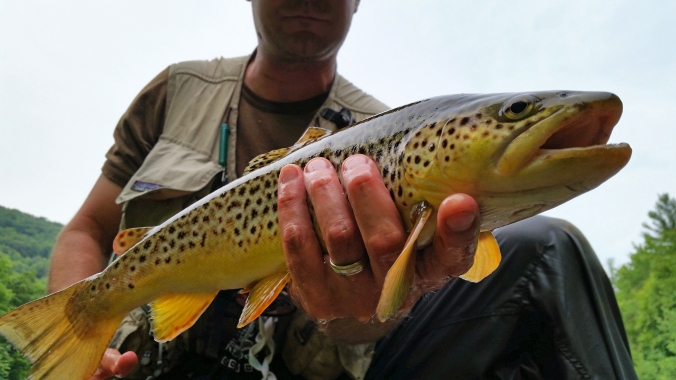 It was the kind of day where I was blissfully unaware of passing time, as I shared the wild space with blue herons and bald eagles. I was surprised by the darkness that came halfway up the third island. I first noticed the fading light and thought is was only dark clouds moving in. But when my eyes struggled to pick up the line, I conceded to the signals and checked my watch for the first time since dawn.

8:45 pm. The top of the third island would be my last stand. I caught one more fish in the near-dark as big raindrops blew in.

Big weather came quickly, and I started my return. On the forest path I walked for a half-hour through a monster thunderstorm. Cold air and colder rain washed away any residual grumblings in my soul that were still with me, and the cleansing of my thoughts and exhausted body was complete.

I needed nothing else but the river.

. . .The patch of forest beyond was more open than I remembered, and I walked easily through tall spruce and dying ferns, chasing the last remaining shade-line sideways until it disappeared. Silence soaked in with the shade. With the fading light, I felt the cool earth of the forest reach up and take over what the fleeting sun had left behind.

These changes of light and season happen both suddenly and gradually, depending on your own perspective and movement in time. Sit still for a while and watch the daylight fade into blackness, and it takes hours. But walk among the trees at dusk, across a soft bed of spruce needles, after a long day on the river, and time speeds up. The pace of the trees, the perspective of the forest takes hold within you, and a good long look into the future looks a lot like the past, with the days and nights rolling into each other, turning in concentric circles, day to night, season to season, through a window of time both small and wide all at once — and all of it happening both here and somewhere else concurrently, though you can’t be sure . . .

Quick Tips — When to Fish Just One Nymph

John and I always keep count. He’s the only fishing friend who can pull me into such a race. And I’m not sure why.

Like all fishermen do at some point, I used to keep count of my catch. I even roughly calculated my catch rate at the end of the day, like this:

“Let’s see, I fished for five hours, but I took a twenty minute break around lunch. Walk in time was fifteen minutes, so subtract that too. I caught twenty-six trout, but I COULD have caught those couple of trout that came unbuttoned if I was more careful, so let’s add those in and say thirty. Multiply, divide and there’s my catch rate.”

But I don’t count much anymore. And I don’t like to compete against anything but the river and the trout. I don’t mind losing to the river on occasion, either. Because loss is a wonderful teacher.

But John baits me back into counting every time we fish together. And there’s no fuzzy catch-rate-math involved — just straight up fish counting.

Searching Through the Margins

I guess I was about ten years old when I started pushing past the boundaries of my parents’ twelve acres of hills and trees. I easily remember the day that I walked into the damp valley and past the tiny runoff stream which I always imagined may hold a few trout — or at least a few minnows. Instead of staying on the near side of the watery divide, I crossed it. I looked back once. Then I started up the hill toward the unknown. In my boyish, drifting thoughts, anything was possible . . . and I’ve been wandering ever since . . .

People do the same things. The instincts of fishermen find identical paths upstream through the river — watery trails lead to the best water with the greatest efficiency. You can easily see where everybody else fishes. And I guess the flies and tippet-tangles in streamside branches signal that we all make the same casting errors too. Presented with the same problems, fishermen come up with the same solutions, and we make the same mistakes.

That’s all pretty harmless and kind of fascinating. But then there’s that thing we (all) do where we leave our rod on top of the vehicle and drive away. WTF?

Will they be fly fishermen at fifty? Will they take on fishing as a way of life? Will they need it as something to help them through difficult times? I don’t know. But I’m giving them that chance.

Joey waded through a knee-deep riffle, toward a bank side boulder that he’d never reached before. We’d fished for two hours with the fish count as zero as the skies unloaded a hard rain into the river. I waited underneath the half-shelter of a large sycamore and watched my son from twenty feet away . . .

I walked behind Dad to the river. I kept my head down through the steady morning rain, watching water drops grow on the brim of my hat and then fall in rhythm with each step forward. On a muddy side trail I followed Dad: my boot tracks into his, my wide and awkward gait to keep up, the sucking sound of mud and rubber separating with each step, and more water rushing in to fill the hole behind — then the splashing of my own half-sized boots into his full-sized tracks.

We walked until our path finally ended underneath a stand of spruce trees at the edge of the river. Dad looked back . . .